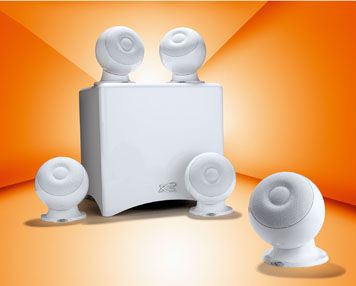 It’s over a year since we originally reviewed the Eole 2. We gave it a complimentary four stars the first time, but now that the price has been slashed by £200, could five stars be in order?

In the glossy white finish, the French-made Eole 2 looks rather fetching and certainly stands out from the crowd.

The five spherical speakers resemble a set of designer crown green bowls, although we wouldn’t recommend flinging them across your living room floor.

Each one uses a 2.9cm soft-dome tweeter and 10cm midrange woofer. Five pedestal stands come supplied, which can also be attached to a wall; the speakers are kept in place with magnets.

A pair of stalk-like speaker stands also come in the box, so you can mount the front left/right or surround channels. Cabasse even includes 45m of bell-wire to hook the speakers up to a home cinema amp.

The relationship between the satellites and Cabasse’s Santorin 21 sub is smooth enough.

The subwoofer is arguably the star of the show, impressing with its reach, weight and ability to keep its cool when the on-screen action heats up.

The satellites breathe easily, sounding crisp and clear at the top and refined and full-bodied in the midrange.

You can’t really criticize the level of detail on offer. Surround effects are delivered with pace and precision although the soundstage doesn’t offer the cohesion of the best.

Lacks a sense of drama
The system’s biggest flaw is its lack of drama: the explosive soundtrack to Unstoppable didn’t really grab us in the same way as it did when heard on comparative rivals.

We found ourselves wondering when the package was going to explode into life, but that moment never really arrived.

The Cabasse’s mild-mannered approach holds it back with music, too. Beyonce’s If I Were A Boy sounds pleasant, but there isn’t enough bite to drums and her vocals lack scale.

While the recent price drop should be applauded, we’re afraid that it isn’t quite enough to boost the Eole 2 from its original four-star rating.

It’s still a capable system, but not one we’d deem class-leading.