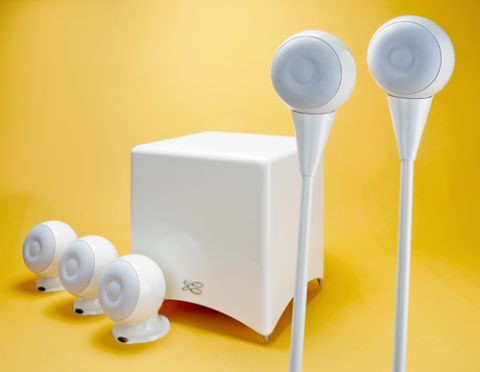 There’s a lot to like about the Eole 3, but its lean bass will doubtless be an issue for some

To say the Cabasse Eole 3 speaker package requires some patience to set up would be quite the understatement.

In fact, manage to get it up and running without a single expletive and you should well consider yourself a saint.

To its credit, you do get everything you need to get started in the one box, including the Santorin 21M2 sub, 40m of bell-wire for connecting the satellite speakers to your AV receiver, bookshelf stands and two tall stalk-like floorstanders for the front speakers, now rather synonymous with the Cabasse Eole range (see our Cabasse Eole 2 review).

Cabasse has managed to squeeze a 10cm mid/bass driver and 29mm tweeter into each of the spherical satellites – enclosures no bigger than 13cm across. All the satellites are identical, and feel sturdy and well made with their metal enclosures and fixed grilles. They’re available in black or white.

To keep the speakers looking clean and simple, Cabasse has placed their terminals in the stands, which makes for the frustratingly fiddly setup – particularly when you have wires from the speaker and your amp needing to go into a single set of terminals.

It’s not a quick setup, but it is an effective one once complete. The speakers, for instance, are magnetically secured to their stands for easy positioning. We like little touches like that.

We run through Skyfall on Blu-ray and it’s obvious that Cabasse has taken some steps to improve the Eole 3 where its predecessors fell down. For a start, sound spreads well between the satellites, creating a much bigger and more cohesive soundstage than previously.

The Santorin 21M2 sub is perfectly integrated too, and has the speed and agility to match the fast, rhythmic quality of the satellites.

You won’t get that low, bassy muscle that you’ll get with something like the Q Acoustics Q7000i – there’s considerably less low-end punch here – but there’s liveliness and enthusiasm in spades instead.

The drama of Skyfall’s opening scene, which sees Bond getting into some fisticuffs on top of a moving train, is built up brilliantly, with all the tension of the accompanying soundtrack conveyed well.

But when the guns start firing, there’s less authority and impact to it than we’ve heard on other systems, making the important climax of the scene fall a little flat.

Musically, it works well, as a live Blu-ray performance of Beyoncé’s Halo proves. Yes, we’d like more bite to the drums than the Eole 3 offers, but what is there is rhythmically precise – and there’s a lovely tonality to the vocal that makes it an enjoyable listen.

We did pick up an occasional touch of brashness in the treble, but it wasn’t enough to annoy.

There’s a lot to like from the Cabasse Eole 3. It’s a big-sounding system with great presentation and stacks of detail.

However, there simply isn’t enough here, especially compared with the competition, to keep us from wanting just that little bit more.