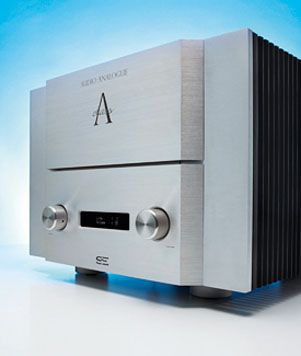 This Audio Analogue is a splendidly rounded performer, sonically. It’s fantastic, if you can cope with the size, weight and heat

The Class A SE is the size of a baby hippo and weighs in at a back-breaking 62kg. It also runs hot enough to fry eggs.

Yet, despite all this fuss, its output is rated at a laughably puny 50W per channel into an 8 ohm load – the kind of output level that most budget amplifiers typically produce.

Anyone spending over nine grand on a stereo amplifier has got to be disappointed by that. Right?

However, look more closely at the specifications and you’ll notice that power output doubles as impedance halves – right down to delivering a mighty 200W into 2 ohms.

This doubling of power is a neat trick that only a handful of amplifiers manage, and they tend to cost at least as much as this Audio Analogue.

It strongly suggests that this is an amp to control any partnering speaker with an iron rod.

Quality construction
Build quality and finish are excellent, just as we’d expect at this price level. This is a mighty expensive product, but even a cursory inspection reveals that it clearly costs a lot to make.

We even like the remote handset. It’s simple, made of metal and feels nice to use – a rarity even on high-end kit.

We do have a few minor complaints, though.

Shake the handset and its buttons rattle: not enough to annoy, but enough for us to wish the button holes in the top panel were more tightly toleranced. Slightly larger buttons would sort it out, too.

While the amplifier feels terrifically well built, the input selector and volume control spin far too easily in use – a bit more resistance in motion would give them the quality, precision-machined feel that the Class A deserves.

Lastly, that display is far too small to read at a distance. With all the empty space on the front panel, surely Audio Analogue can do better?

But such complaints fade like a rain puddle in a heat wave once the listening starts.

The amp that does everything
This amp does everything. It has the dynamic reach to deliver demanding music like the Inception soundtrack at high volumes while still resolving every last iota of bass punch and texture.

Its control is genuinely breathtaking: rarely have we heard an amplifier take control of our reference ATC SCM 50 speakers with such determination.

This absolute stability is a rare quality we’ve only heard in products that make this Audio Analogue seem sensibly priced.

You can add precise stereo imaging and a convincing tonal balance to the Audio Analogue’s list of plus points too.

The way this amplifier delivers a huge soundstage is deeply impressive, particularly with high resolution 24Bit/192kHz recording of Beethoven Piano Concerto No.3 played from the Bryston CDP-1/BDA-1 pairing.

Fine finesse and huge power
But that’s not where the good news ends. Alongside all that muscle is a degree of subtlety and fluidity that’s normally the province of better-quality valve amplifiers.

Listen to a CD of Adele’s Make You Feel My Love and it sounds as intimate and emotional as we’ve heard.

The Class A has a natural way of handling low-level dynamics that most transistor based alternatives don’t quite manage.

The result is a sound with precision and detail, but also quite a hefty dose of soul.

We reviewed the original version of this amplifier back in February 2009.

We loved its performance then, and this latest SE version brings back all the memories.

It’s one of the most charming high-end amps we’ve ever heard, and covers the various sonic bases better than just about anything we’ve heard at this price level.

Nine grand is a lot of money to spend on an amplifier – but this is an awful lot of amplifier.