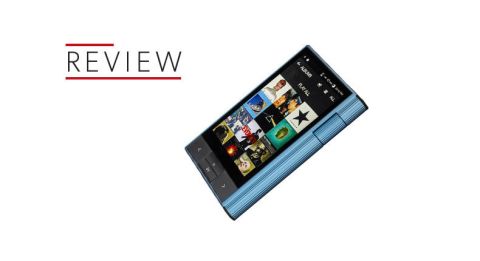 As Oscar Wilde once remarked, ‘nothing succeeds like excess’. Astell & Kern’s Kann player has certainly taken that to heart. Its larger-than-life design won’t be to all tastes, but its superb sound quality makes it all worthwhile.

The Kann’s pyramid-esque build is notably bulky, so much so you can’t really imagine keeping it in your pocket. It’s a little shorter than an iPhone 7 and approximately three times as thick, with a 4in 480x800 resolution touchscreen and four large control buttons at the bottom.

On the right hand side is a cylindrical volume control, which gives a satisfying click with each turn. It’s the sort of thing you can absent-mindedly play with all day.

The Kann certainly feels like a sturdy piece of kit, its aluminium body feeling beautifully finished.

While our sample comes in ‘Eos Blue’, it’s also available in the sleeker ‘Astro Silver’ – names chosen by Astell & Kern because they represent the goddess of dawn, and embody the “strong yet soft features” of the Kann.

Unfortunately, the goddess of dawn was unavailable for comment.

The Kann might be big, but that extra space leaves room for a lot of physical features.

There’s a choice of unbalanced (3.5mm) and balanced (2.5mm) outputs for headphones and line out ports on the top of the player – so you can use this as a music source in your home system as well as take it out and about.

The Kann also has aptX HD Bluetooth support for connecting to compatible wireless speakers. That lets you push better-than-CD quality audio - 24-bit/48kHz, in this case.

On its base are two storage slots, one for normal SD cards – up to 512GB of storage size – and one for MicroSD cards up to 256GB.

Combined with its 64GB of internal storage, that’s a total of 832GB of space. With one CD being approximately 700MB, you can get around 1200 albums onto the device. More than sufficient for most music collections, we’d guess.

The Kann can support up to 32bit/384kHz and DSD256 playback for your hi-res tracks, converted through its AKM AK4490 DAC; but there’s also built-in integration for Tidal (as well as Moov and Groovers+ for Hong Kong and Korean markets) so you can wirelessly stream music.

Some might question why Spotify, currently the most popular streaming service, isn’t included. The answer is that Astell & Kern is focusing on high-quality streaming and doesn’t think that Spotify sounds good enough.

Charging the Kann is done by USB-C connection, with Astell & Kern saying that you should get 14 hours of playback from the 6,200mAh battery, enough to use it throughout the day without trouble.

There’s also a Micro-USB port, so you can plug it into your PC or Mac computer and use it as an external DAC.

Using the device itself is relatively straightforward. The user interface is based on Android, with some modifications to maintain system stability and avoid interference, which can jeopardise sound quality.

Its screen is responsive, and the large buttons make playback control easy, but mixing them together takes a bit of getting used to. We found ourselves hitting the rewind button, instead of the ‘back’ button, on more than one occasion.

The aesthetics might raise a few eyebrows, but start playing and you’ll soon forget all about them. There’s lashings of depth, detail, and dynamism from this player that will make you reluctant to take off your headphones.

We start by playing Beyond by Daft Punk. There’s a real texture to the electronic, sandpapery vocals as the Kann reveals the little crackles of modulation at the beginning of each word that aren’t immediately picked up by lesser players.

The high-pitched, almost-orchestral score that starts the song off is a good test of how your audio kit handles rapidly changing volume. The Kann smoothly matches the dynamic flow as the synthesisers soar upwards.

It traces the peaks and troughs of the track without ever feeling weighted down or compressed.

Moving to Frank Sinatra’s Come Fly With Me, you get a clear sense of both the difference in scale, and power, between the singer and his band.

Sinatra’s voice is elevated above the brass trumpets with notable aplomb, like an actor moving to the front of the stage for his big moment. That’s not to say that the backing instruments are paid any less attention – the Kann keeps them precisely organised in a spacious presentation.

Bass drums are conveyed with tenacity and force, digging down into the lower frequencies and presenting them with a good deal of thump so you get a clear indication of the drummer’s force.

There’s a low pop to each beat of Childish Gambino’s Zombies that keeps you invested, and excited, by the music.

Even when fed lower resolution tracks via streaming services, the Kann maintains its character. While there’s an expected drop in detail, it’s still punchy and fun. If you want to show off how impressive good hi-fi can be, it’s not compulsory to buy more hi-res files.

We plug the Kann into a MacBook Pro, to check out how it performs as a DAC via its micro USB input. Even with low-resolution Spotify streams, there’s a notable improvement over the laptop’s own headphone output.

The Kann gives more detail and dynamism across the board, and while it might not necessarily be better than a similarly priced dedicated DAC, it will certainly give your music more flair.

MORE: DACs – everything you need to know

When it comes to performance per pound, there’s no mistaking the Kann’s sonic chops. It’s dynamic, has a great sense of timing, and gives an insightful performance

Other portable players in the Kann’s price group might need to watch their step – the competition just got a bit fiercer.

See all our Astell & Kern reviews