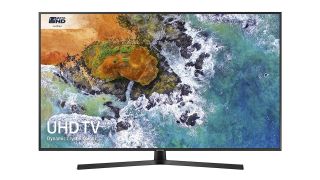 Everyone loves a bargain, and with Black Friday happening at the end of November, there will soon be plenty of them around! But you don't have to wait until Black Friday to get your hands on a steal. Right now, the Samsung NU7400 4K TV is on offer at a knockdown price.

Garnering the most attention is the 50in model – the UE50NU7400 – which is currently available for well under £450.

But is it any good? We haven't tested this specific model, but by breaking down the specs and figuring out where it sits in the overall Samsung range, we can work out whether this is a likely bargain, or one to avoid.

The short answer: The UE50NU7400 offers a lot of screen from one of the biggest names in the business for an affordable price. It was good value compared to flagship sets when it launched at £749, so with a discount of over £300, this should be quite the bargain.

Of course, because this is a fairly entry-level model, it does without the quantum dots of its QLED siblings, relying on standard LCD technology instead. Samsung's snazzy One Connect box is missing, too, which means all of the connections are in the back of the TV.

But you still get a 4K resolution, HDR (including support for the advanced HDR10+ format), and one of (if not the) best TV operating systems out there, both in terms of usability and the quantity and quality of the apps.

Provided you're not expecting a true premium performance, we think this is a good buy for the price. Move quick if you want one, though – this is a 2018 model that has been discontinued. Once it's gone, it's gone.

Should you want to go bigger or smaller, the NU7400 is also available with discounts at 43in, 55in and 65in (more on those below).

That makes it a budget option by Samsung standards, so it does without more advanced features, such as quantum dot technology and the One Connect box, but it does have the same operating system as even the most expensive models in the range. It's a great operating system, too, boasting all of the obvious apps (Netflix and Amazon in 4K HDR, plus all of the UK's catch-up apps) and some that are less common, including Now TV and BT TV.

On the physical connections front, there are three HDMIs, two USBs, ethernet, aerial and an optical audio output. As is the norm for Samsung these days, there's no headphone socket – the intention is that you use Bluetooth headphones.

With the 2018 focus having been on the QLED sets, we haven't tested this model, but we did award five stars to one of its predecessors, the MU7000. Samsung's overall TV track-record in recent years has been excellent – we can't recall a recent model that received anything less than a four-star verdict.

Customer reviews are strong, with the set having an average rating of 4.3 out of 5 on Amazon. That's rarely a guarantee of quality, but we're confident this TV is no duffer.

Verdict: The signs are good for this affordable, large 4K TV from Samsung. The company's flagship sets are extremely impressive and it has a good track record at the more affordable end of the spectrum. What's more, the specs are good for the money. For under £450, we think the 50in UE50NU7400 looks like a good buy.

The 50in model would be our pick of the four available, as it's big enough for cinematic thrills but can be accommodated in most lounges. However, the 43in model (UE43NU7400) costs the same on a pounds-per-inch basis (£8.58 per inch).

The two bigger models are a little more expensive per inch (£9.44 per inch for the 55in model and £10.75 per inch for the 65in version), but still look like good value overall and are well worth considering if you've got a bigger room.