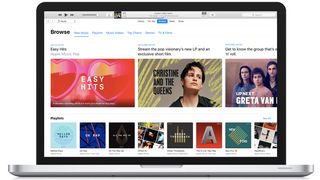 Since the launch of Apple Music in 2015, the streaming service has gained over 60 million subscribers and, just as impressively, racked up a five-star review from us.

Apple gave the interface a hefty refresh during iOS 10's release in 2016, and with the arrival of the Apple HomePod smart speaker and latest iOS 12 software update, there's no better time to get fully acquainted with the ins and outs of the music streaming service.

Whether you're on the free three-month trial or already a subscriber and regular user, we've pulled together some key tips, tricks and features to make sure you get the utmost from Apple Music.

Sure, this is something of a negative note to start on - but if you're signing up for the three-month Apple Music free trial and don't want to commit to paying for the service afterwards, you can opt out straight away.

To do this, click on your profile icon in the top right corner of the screen in the For You tab, hit View Account, then View Apple ID and sign in to your iTunes account.

Next, tap Subscriptions halfway down the page. Here you can 'cancel' your free trial so it won't automatically renew - don't worry, you can still use it free for the three months. This is also how to select your subscription choice in future.

When you sign up to the Apple Music service, Apple will take the liberty of 'following' any artist already in your library as part of its Connect feature. This means your Connect section (now relegated to the For You tab) will be full of new and seemingly never-ending content from these artists. This may not be what you're after, especially if you once bought a One Direction track (for a kid's party or something - we don't judge) through your iTunes account.

It's on by default, but you can switch it off by tapping the profile icon, then clicking on 'Find More Artists & Curators' (to see the artists you're following) and then sliding the Automatically Follow Artists button to 'off'. Now you can make sure you only hear from the artists you really like.

This can present some problems to users with a big existing library, especially if you have your own playlists. Apple will match these with its own tracks so you can listen offline - but it may not always get the right version. So if you're precious about your existing downloads in iTunes (and rightly so), you may want to turn off iCloud. To do this, simply toggle the iCloud Music Library option off.

5. Or have iCloud Music on mobile only

If you have a big existing iTunes music library and you're not sure about Apple matching it for access on your mobile, you can turn this feature off on your computer in iTunes but leave it on for your mobile. This way your existing library is left alone but you can still have offline tracks on the Apple Music mobile app. Turn off iCloud Music Library on your Mac in iTunes by going to Preferences > General, then unchecking iCloud Music Library.

The Apple Music Individual Membership plan, yours for £9.99 per month (or an annual £99 fee), can be associated with up to ten devices, five of which can be computers. You can only stream on one device at a time, as is the case on Spotify, Tidal and other services.

7. Multiple devices at once

If you want to listen to multiple devices at the same time then you'll need a Family Membership. This gives simultaneous streaming access for up to six different people for £14.99 per month.

One slightly hidden feature is viewing the album of the track that's currently playing. You can do this in two ways. The easiest way is to tap on the artist and album name in the now-playing window (highlighted in pinky-red text) - a pop-up will appear asking if you want to 'Go to Album' or 'Go to Artist'. Click on the Album option.

The second, slightly longer method is to tap the three-button icon in the bottom corner of the screen, then tap the track info in the top section of the pop-up menu. That'll take you to the album.

Same as above, but select 'Go to Artist'.

Or, if you've used the longer method: once you're transported to the album page, click the artist's name (highlighted in that pinky-red text). For both methods, you'll be taken to the artist's landing page where you can see all their music and related content (such as new releases, playlists they're featured in, bio, and similar artists).

This is only for those with 3D Touch-compatible phones (iPhone 6S onwards) running iOS 10 and later. If you 3D Touch any song, album cover or playlist, the menu option will pop up - the very same one you get if you tap the three dots. It's a nice shortcut.

If you were wondering what that little 'E' was next to certain tracks, it doesn't stand for exclusive, it's for explicit. So prepare your ears.

You can save tracks, albums and playlists to your phone for offline playback (when you don't have an internet connection) if iCloud Music is enabled (see point 3).

You can identify the songs downloaded on your device as they won't have any icon next to them.

No mobile or network coverage? Simply select the Downloaded Music category in the Library tab to only see the music stored on your phone for offline listening.

Remember: this is both downloaded songs and playlists from Apple Music, as well as your own music files physically stored on the phone.

Want to sort your music library alphabetically by title instead of by artists (the default setting)? In the Library tab, select Songs and tap 'Sort' in the top right corner. Then select Title or Artist in the pop-up menu. Hey presto.

Wondering where the shuffle and repeat icons have gone? Scroll down just a little in the Now Playing screen, and you'll see them pop up right underneath the volume slider.

Much of Apple Music's draw is centred on the For You tab, where you'll find recommended albums and artists based on the music you like. To give Apple's algorithms a steer, you need to tap the Love (heart) icon on the pop-up menu for every song (or album) you like.

There's now also a Dislike option right next to it (with a slash through the heart icon) to tell Apple songs you don't want it to recommend. You can do this for whole playlists, too.

You can rate songs in the Apple Music app, just like you can on iTunes.

When playing a song, tap the 'Rate Song' option in the pop-up menu, and then select your star rating out of five.

This feature is turned off by default, so go to Settings > Music and toggle 'Show Star Ratings' on.

In Browse's Playlists section, you'll find curated playlists from the likes of Pitchfork, NME and Sonos, as well as playlists for every mood and activity.

Tailor to your musical tastes even further by going to the Genres section and filtering music by, you guessed it, genre.

You can filter playlists by genre, too, in the Playlists section.

You can search for music either in your own library or across all of Apple Music. Simply tap the relevant tab when you start typing in the Search tab.

You can only see the most recent three searches in your history, and there's an option to clear them all - in case you want to erase all the evidence of those secret Taylor Swift listening sessions.

21. Create your own radio station

You can play an Apple-curated selection of music based on a certain artist or track. Simply click on the three dots on an artist or a track and select Create Station from the pop-up menu to listen to related music. Tap the 'star' icon on subsequent songs to tell Apple to keep playing more songs like it.

Beats 1 is Apple's worldwide 24/7 internet radio station. On the Radio tab, go to the Beats 1 section to see what's playing live, what's on next (for the next 24 hours), and what other shows are currently on its roster.

Head to the Beats 1 tumblr page to find the lineup for the month - this changes periodically, so it's worth checking in to see if your favourite artist suddenly pops up (or goes away).

Missed a show? Don't worry, you can now listen to the entire programme later on demand. You can also view the tracklisting from the shows and play individual tracks.

Click on individual radio shows in Beats 1 to see all the on demand content and playlists from each episode aired.

Exclusive Apple content can be found in TV & Films in the Browse tab, and includes 808 (a documentary about the Roland TR-808 drum machine), Carpool Karaoke, reality show Planet of the Apps (basically a Dragon's Den for smartphone apps) and a growing selection of live concerts and music documentaries.

You can use voice control to play your music, whether you're on your iPhone or Apple Watch ( for instance: "Hey Siri, play AC/DC"). But it's actually even cleverer than that. You can start a radio station by saying "play AC/DC station".

Apple Music can also play by date, popularity and release date, so "play the number one hit from April 1988", "play the top songs by AC/DC" or "play the newest song by AC/DC*" all work. It can be a little hit and miss at times, but it's worth experimenting with all sorts of commands.

(*other bands are available. They're not as good, though)

Siri voice commands and Apple Music are the key ingredients to a great Apple HomePod speaker experience, so if you've bought yourself a new HomePod, you can ask it all sorts of questions to get your favourite tunes playing. Start off with "Hey Siri, play something I like" and it'll use your Apple Music profile to create a personalised radio station of songs you know and like.

If you have a HomePod speaker, you might not want your kids or that friend who only loves country music messing up your carefully curated For You recommendations when they start shouting out song requests.

Keep your Apple Music profile separate from what the HomePod's been playing by firing up the Home app (which you should've downloaded when setting up the HomePod), head to the Details section and switch 'Use Listening History' to off.

Want to wake up to the sound of your favourite song? When setting an alarm in your iPhone's Clock app, tap Sound > Pick a song (under the Songs section) and then choose a track from your Apple Music library.

You can karaoke! Scroll up from the now playing screen, and lyrics (if there are any available for your chosen song) will appear. Alternatively, tap the Lyrics tab in the pop-up options menu.

You can now search for songs by lyrics, too (iOS 12 is needed). Just start typing lyrics in the search box and voila - you'll get the song you're looking for (or at least suggestions for what it could be).