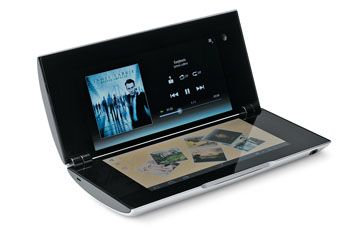 Sony has dared to be different, but this time the gamble hasn’t paid off

Sony’s Tablet P dares to sail against the iPad-shaped tide of tablet design.

It sports twin 1024 x 480-resolution 5.5in (13.9cm) screens arranged in a folding, clamshell configuration. This allows for a smaller, lighter device than a conventional tablet.

There are considerable advantages to this – and some equally significant drawbacks. Strengths first: the twin-screen set-up seems natural when you’re typing on the virtual keyboard.

That dual-screen also works a treat with eBooks. Holding the Tablet P like a paperback seems natural, and its dual screens display each page cleanly.

There’s nothing wrong with the operating speed or web browser, either: it has an NVIDIA Tegra 2 processor running at 1GHz plus Android Honeycomb.

Frustrating restrictions with video
So far so good; but now to those drawbacks. Video is restricted to the top screen, with the lower screen devoted to touch-panel controls.

Picture quality is perfectly acceptable, but it’s frustrating that the viewable screen is scarcely bigger than that of a Samsung Galaxy Note.

The same problem crops up with games – the Tablet P comes preloaded with the classic PlayStation title Crash Bandicoot, but only a portion of the screen displays the game itself.

Most frustrating of all is its performance as a standard Android tablet. The Android Marketplace also appears only on the top screen – so key features can be masked and hard to get to.

After all these drawbacks, the Tablet P’s respectable (if slightly brash) sound seems less important, as does its support for a decent range of different file formats.

Add in the fact it costs £100 more than a basic iPad and yet has only 4GB of memory as standard, and the Tablet P’s ship is sunk.