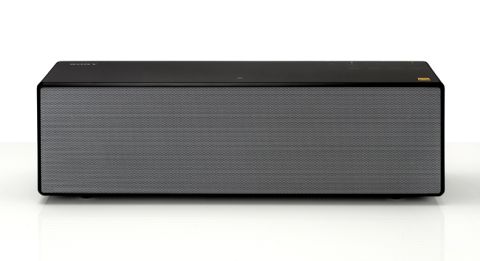 You'll know when someone's switched on a Sony SRS-X88; it has a sound befitting its muscular stature.

When we were children, this is probably what we thought things would look like in the future: robotic chrome, straight lines, blinking lights.

We also thought those things would be able to fly, but that’s rather beside the point.

Regardless, the Sony SRS-X88 has plenty of other features that would have boggled our infant minds anyway. Essentially, this is a pretty clued-up piece of wireless kit, heavily focused on delivering high-resolution audio.

For that, Sony has its own Big Three: the S-Master HX amplifier, which it claims will reduce distortion and noise; its Digital Sound Enhancement Engine, which upscales compressed files to nearer high-resolution quality (the SRS-X88 is happy to play AAC, WMA, AIFF, ALAC, DSD, WAV, MP3 and FLAC); and ClearAudio+ which Sony say optimises audio for clarity and separation.

And the SRS-X88’s stature, brawny and stout, hints as to the set of drivers you’ll find behind its grill. Sony has armed it with pairs of 20mm soft dome tweeters and 4cm magnetic fluid mid-range drivers, sandwiching a 7cm subwoofer and a dual passive bass radiator. It's a generous offering.

As is the range of connections at its rear: USB types A and B, LAN and 3.5mm line in, as well as input for your power adaptor. Wirelessly, it’ll cope with Bluetooth (whose quality is claimed to be enhanced by Sony’s LDAC technology), AirPlay, wi-fi and DLNA, and is equipped with Google Cast and Spotify Connect.

As we said: plenty of features. Rather a doddle to use, as well. Even if you don't want to take advantage of its NFC one-touch pairing facility, connection is quick and hassle-free (which shouldn't go under-appreciated).

It's compatible with Sony's SongPal app, too, which allows you to control music and settings on various sources as well as build a multi-room system using the SRS-X88 and other selected Sony speakers.

All rather intuitive; or you can just use the included remote control – another handy addition that also helps the package feel that bit more premium.

We want to feel the full weight of the Sony's stock, so begin by playing Queens Of The Stone Age's Songs For The Deaf. And wallop. After its radio-skit false start, You Think I Ain't Worth A Dollar, But I Feel Like A Millionaire, bursts through like a kick in the teeth.

We are immediately made aware of how quickly the SRS-X88 goes from 0 to 60. It's ferocious, but organised; while some competitors might let the guitars meld behind Nick Oliveri's searing screams, this Sony keeps them working together but stationed apart on its generously-sized soundstage.

It leaves breathing space in that sense, but also dynamically: there is still another gear into which it can slip for fuzz-drenched guitar ornamentals.

Most importantly, though, there is intensity. The sound isn't only loud and spacious, it really feels like it’s trying to get somewhere. Take the frenetic drive of First It Giveth or Go With The Flow: there's a movement in these songs that this speaker manages to capture where many struggle.

That intensity and anticipation are there in the opening of A Song For The Dead, as is a sense of how the SRS-X88 manages to capture a room acoustic. There is only so much analysis a speaker such as this can offer but, as the drum kit is laid almost bare during the intro, you can hear the modest size of space in which it was recorded.

It's the kind of thing that stands out with a capable speaker.

We draw back a little with Sufjan Stevens' Illinois, and are greeted by a sound not only as spacious as before, but capable of great delicacy as well. There is still impetus, but the SRS-X88 manages not to be heavy-handed with it. In fact, what we would like in places, such as with the vocal, is a little more oomph.

There is a good amount of overall depth, thanks to that subwoofer and dual bass radiator, but we'd like that to support the midrange with a little more body, solidity and warmth.

Our only other caveat is that the SRS-X88 is sometimes left a little wanting rhythmically. When we play Shye Ben-Tzur's Tawhid, for example, it sometimes gets slightly tongue-tied, thus making the oft-changing Eastern rhythms of this ethereal guitar song difficult to decipher.

It doesn't detract from our enjoyment of the rest of the sound, but there are competitors who are noticeably more competent in this respect.

It doesn't quite rival the class-leaders, which in this case would be Geneva's Award-winning Model S Wireless DAB+, but from its sophisticated design to its bold and spacious sound – and the fact it is now widely available for less than £300 – there is much to love and much to recommend about Sony's SRS-X88.