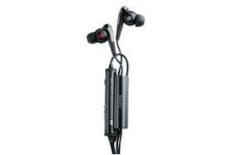 The sound’s passable, but they don’t do what it says on the tin

For some, the noise-cancelling headphone is one of the great inventions of the 20th century.

These £50 noise-cancelling buds from Sony also have an added ‘Monitor' function which allows you to have a conversation (sort-of) while your earphones are still in place.

Comfortable enough
At first glance these black, plastic Sony's feel cheap, but in place they're comfortable enough, with the on/off controls for the noise cancelling, and monitor on a battery-pack that clips to your belt.

In use, they serve up a sound with a confident midrange that handles vocals well, together with a bright yet smooth treble.

The bass lacks some authority though, and, with the noise-cancelling function switched off, the sound becomes rapidly wearing.

Cancel the noise cancelling
The average sound would be forgivable if these earphones were better at what they're supposed to do – namely cancel out ambient noise. Unfortunately they're not great at it. Nearby conversations are easily audible, as, indeed, are many of the other sounds that should be blotted out.

It's not so surprising, then, that the monitor function works fine – since you could probably pretty much hear what was being said without it.

If you're after an upgrade set of earphones for your MP3 player, these are serviceable, but no more than that – and if it's specifically noise-cancellers you're after they will probably disappoint.

Either way, it's hard to give these headphones a decent rating when there's so much better around.