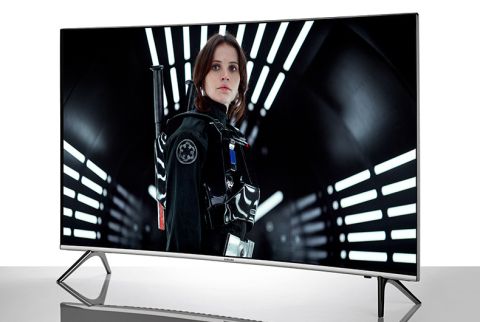 It’s been a while since we’ve seen a range of TVs as consistent as Samsung’s 2016 UHD line up.

No matter the screen size, in both curved and flat designs, it impresses us time and time again with a picture that ticks all the boxes.

Even as one of its entry-level UHD sets, the Samsung UE43KS7500 shows how well 4K can be done on a smaller, more affordable screen.

It’s certainly not the cheapest 4K option at this size, but its performance proves spending that little bit extra really can make all the difference.

With its 43in screen, the KS7500 is the smallest 4K set in Samsung’s armoury, and it looks even smaller still due to its curved screen.

We’re still not completely sold on curved designs, and at this size it seems even more unnecessary, but at least its reduced footprint will take up less space for those short on it.

It looks good too, of course, and follows the rest of Samsung’s 2016 TV design language – well built with a barely there bezel, neat aluminium legs and a smooth, uncluttered back panel design.

It comes with two remotes, a standard wand and the smaller smart option. Both are decently laid out and easy to use, but we find ourselves using the regular one for access to a fuller range of options.

Like the rest of Samsung’s UHD range, the UE43KS7500 uses Quantum Dot technology to deliver a wider, more accurate colour gamut, and employs an edge lit panel with local dimming too.

It also conforms to the UHD Premium specification, meaning it offers at least 1000 nits of peak brightness for displaying HDR content at its best – something its rivals can’t provide.

A further benefit is Samsung’s moth-eye technology, which really helps to keep unwanted reflections at bay.

It’s something you might take for granted, until you compare it to a cheaper screen without it and see how distracting your own reflection can be.

Samsung’s One Connect box handles most of the set’s connections and includes four 4K-ready HDMIs and three USBs for Freeview HD recordings and media playback.

There is also an optical out, and the option of getting online via wi-fi or hardwiring using ethernet.

Hooking your TV up to your home network of course opens up its full range of smart features, which are based on Samsung’s own Tizen interface.

It’s a cleaner, more intuitive set-up than in previous years, and we find it easy to use and navigate.

Menus are clear and accessible, and we like the personalised content suggestions the home menu offers from any on-demand services you’re logged in to, including Netflix, BBC iPlayer, Amazon, ITV Player and Demand 5.

To get the best from the UE43KS7500, we find ourselves playing around with the settings, and while we are sometimes able to use one group of settings across sources, this set benefits from individual source set-up.

Overall, we find the ‘Cinema’ picture mode with ‘Warm1’ colour temperature to be the best balance; you may want to try it on ‘Standard’ for a slightly brighter picture.

Not that this set has any brightness issues to worry about. Its UHD Premium logo means there is plenty of power behind its backlighting, which the competition just can’t keep up with.

Even with regular TV it makes for a more striking picture, but it’s most important with HDR content, where bright elements are allowed to punch through with much more intensity.

It’s hugely convincing, particularly in how it holds on to depth and detail in highlights, but it’s credit to Samsung that black levels aren’t affected in the process.

They go impressively deep but remain subtle and nuanced, so you don’t get dark details that blend into one and become hard to make out.

Even better, when you get a scene that combines the two extremes, the KS7500 handles them both without issue. It’s here where a cheaper set like the Philips 43PUS6401 struggles and can compromise on both.

Bolstering this performance is the UE43KS7500’s excellent handling of colour, delivering just enough punch to colours without compromising on believability.

HDR content benefits from this too, the red colour of Mars in The Martian glowing with an intensity that lesser sets struggle to deliver.

It’s subtle with shading too, giving depth and texture. Combine this with the levels of fine detail, clarity and edge sharpness that this set is capable of and you get a real believability to the layering of objects in a scene.

You won’t find as convincing a picture in either the Philips 43PU6401 or the Panasonic TX-40DX700.

We wouldn’t take a screen much smaller than 43in to get the most of 4K images, but the benefits are maximised on this Samsung screen.

Samsung’s upscaler does itself proud too, working well to deliver clean and stable Freeview HD images, and not doing a bad job with standard definition either.

We don’t notice many motion issues – we turn off motion processing to start with, then add in if we feel the need – and for the most part the Samsung serves a stable picture.

If you want to add any at all, try the custom setting and keep both judder and blur on the low side.

As for sound, the Samsung doesn’t do a bad job at all. Voices are clear and direct, and there’s enough weight to stop the set sounding thin or hard.

There’s a lack of separation though and subtler detail can struggle to be heard in a busy scene.

A soundbar would make a useful upgrade to the sound, but if your budget can’t stretch, or this is a second-room set, it will certainly get you by.

While big screens might have the wow factor for reviewers and consumers alike, smaller-screen TVs are still a go-to for many, whether that be down to a lack of space or sometimes just as a second TV.

The UE43KS7500 is a solid choice for either of those instances, showing off much of the talent we’ve seen higher up Samsung’s ranges, and meaning very little in the way of compromise.

Bright, sharp and punchy 4K images don’t come at the cheaper end of the TV spectrum, but the results here show they’re really worth the extra outlay.