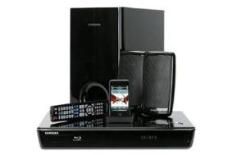 The Samsung HT-BD1220 received a First Test and five-star review in July 2009. But now it faces tougher competition in the shape of the new LG HB354BS and Panasonic SC-BT200.

The glossy main unit stands shoulder to shoulder with its rivals, and gives nothing away in the style stakes. The touch-sensitive buttons add some flair while the recessed volume dial on the top of the Blu-ray receiver gives the unit a tidy look.

The speakers aren't as elegant as those that accompany the LG system, and feel lighter and cheaper. But at the same time, they don't look as dull as the those on the Panasonic.

The 'BD1220 has a slick user interface. The menu for setting up the main speakers is a bit fiddly though – you can't hear the test tone and alter the speaker levels simultaneously.

And, with Samsung's 'Audio Upscaling' mode engaged, the 'BD1220 sounds refined. Through the iPod dock, music is rich and full-bodied, with the sub injecting a generous dose of bass where required.

Dialogue sounds closed-in
Considering it's a 2.1 system, voices are clear, but not especially open, making dialogue sound a little closed-in.

However, the system could have a firmer grip on fast-moving and slow-panning scenes, where rivals show less judder.

The 'BD1220 is a very competent and affordable Blu-ray-in-a-box system, but in comparison with newer rivals, it can no longer be deemed worthy of a five-star rating.