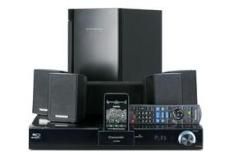 It's fair to say that the Panasonic SC-BT200 can't match its rivals for style alone. There aren't any curvaceous speakers or touch-sensitive buttons: instead, you have a simple main unit and ordinary-looking satellite speakers.

It fares better on the feature front. An iPod dock lurks behind the front panel, as do USB and SD card inputs.

On the rear of the Blu-ray receiver is an HDMI output, and twin optical inputs for accommodating external kit (a couple of HDMI inputs wouldn't go amiss, though).

The Panasonic also has the benefit of auto set-up, using the supplied micro-phone when you first switch it on.

We've been heaping praise on Panasonic's standalone Blu-ray players recently, and this player is no slouch, either. On-screen noise is virtually non-existent, and pictures look remarkably clear and three-dimensional.

Using The Mummy: Tomb Of The Dragon Emperor, the depth of image is stunning, as is the detail on the Emperor's sarcophagus and the artifacts in his tomb. Colours appear natural and blacks are solid.

Taut and precise sound
Panasonic systems have often fallen down on speaker quality, but the 'BT200's sound is very good. Instead of unattractive, boomy bass, it's taut and precise.

Dialogue has body, and refrains from sounding boxy or closed-in. Slot an iPod into the integrated dock, and you're greeted by well-balanced tunes.

The only potential stumbling block is the price. But this all-in-one package is so good, we say it's worth every penny.