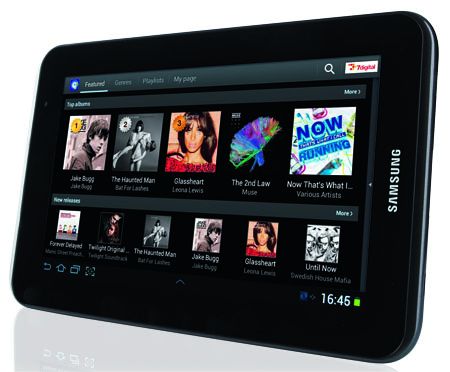 The Tab 2 7.0 does what it says on the tin, but many rivals do it much better

Samsung’s success in the tablet arena hasn’t been helped by it seemingly confusing range of devices. ‘Tab’ and ‘Note’ run in parallel, offering similar and at the same time differing screen sizes, specifications and features.

The bottom line is if you want a 7in Samsung tablet, then the not-so-snappily-named Galaxy Tab 2 7.0 is your only option. In the flesh, it’s as uninspiring to look at and hold as the Note 10.1. It certainly lacks the clean lines, sharp edges and wow factor of its closest rivals.

Layout of controls (volume and power) and cameras (one front, one back) are similar to the Samsung Galaxy Note 10.1, although you don’t get a stylus as part of the Tab package. The 3.5mm headphone jack sits just off-centre on the top when the tablet is held in portrait orientation.

Until an impending update, you have to make do with Android’s Ice Cream Sandwich operating system running behind Samsung’s Touchwiz user interface. This makes for a relatively pleasing user experience, although the Tab’s reaction times are a split second behind the top tabs in this screen size.

Part of the problem lies with the Samsung’s power, or rather lack of it. The 1GHz dual-core processor can’t match the speed achieved by the quad-core of the Google Nexus 7. The Tab doesn't react to swiping and pinching gestures as quickly or as smoothly as some rivals.

Samsung’s Hub is home for various widgets, including dedicated icons for music and movie players. Files can be transferred to the Tab using drag-and-drop, although there’s always Samsung’s own Kies software (for PC and Mac).

Kies is a decent way of organising and converting your music, video and photos for use on the Tab, but the integration and execution still lags behind Apple’s iTunes. File compatibility is good: the Tab can handle a wide range of audio and video codecs, including WAV, FLAC, MPEG4, H.264 and DivX among others.

There's an SD card slot to expand the memory if you wish, and the Tab hosts a 3MP camera on the back capable of recording 720p video at 30fps (frames per second). Picture quality is passable but fine details and textures don't shine through as clearly as they should.

The Tab shares the same enjoyable sonic delivery as its Note compatriot. Listening to Leona Lewis’ Trouble, we’re impressed by the powerful delivery. There’s a sense of weight and authority to her vocal and bass notes, even if it isn’t the last word in subtlety or agility. This well-rounded sonic signature makes for a very listenable machine.

Switch to video playback and, again, the Samsung produces a mixed bag of results. Fire up the BBC iPlayer app and an episode of Later With Jools Holland, and the general level of detail and definition is decent.

There’s good depth to blacks but, once again, other tablets at this size produce a sharper, glossier image.

The Tab 2 7.0 doesn’t do much wrong, but neither does it do enough to stand out. And, like the Note 10.1, it leaves us feeling just a little disappointed.