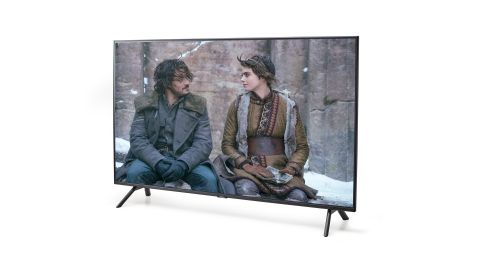 This Q90-lite is an excellent, substantially featured performer that represents excellent value

We’d all love a flagship TV – of course we would – but few can afford one and fewer still can justify buying one.

But what if you could get a healthy chunk of flagship performance without spending flagship money? That’s the dream isn’t it? Well the Q70R makes that dream a reality.

It offers many of the features of the top-of-the-range Q90R but with a very substantial discount. In fact, this 65in variant (the Q70R is available in sizes ranging from 49in to 82in) undercuts the equivalent Q90R by £1000. That’s enough money leftover for a very decent sound system. Or an extra telly for your bedroom. Or nearly seven years of Netflix in 4K.

Of course, the Q70R doesn’t offer all of the features of the Q90R; that would be silly. So the question becomes, is this a cut-price piece of premium TV gold, or has so much good stuff been chipped away that we’re left with the televisual equivalent of a lump of lead?

The Q70R continues the Samsung QLED trend of thin bezels, sharp lines and pointed corners, but differs from the flagship Q90R with its darker finish and dainty legs. Those legs simply slot into the underside of the chassis, no bolts necessary, but do give the TV a footprint that will prove too wide for some furniture.

This is a QLED TV with a direct LED backlight, just like the Q90R, and that extra layer in the display’s construction adds thickness to the overall design. That said, the almost uniform 6.2cm thickness of the Q70R means it’s only a centimetre and a half thicker than the 65in OLED C9 at its thickest point, although the C9 also has wafer thin panel sections.

Unlike the Q90R, the Q70R doesn’t have a separate One Connect box to house its connections, so every cable runs into its rear, just as it does on the vast majority of non-Samsung TVs.

Those connections include four HDMIs, three USBs, an optical output, and aerial and satellite sockets for the Freeview and Freesat tuners respectively. The HDMIs lack full 2.1 certification but do support 2.1 features such as eARC (Enhanced Audio Return Channel) and VRR (Variable Refresh Rate).

Samsung’s QLEDs also support FreeSync, a particular form of VRR supported by the Xbox One and some PCs. Add some useful game-enhancing picture settings and an input lag of just 16ms, and you’ve got a very tempting display for the hard-core gamers out there.

On the HDR front, the Q70R – like its siblings – supports HLG, HDR10 and HDR10+, but not Dolby Vision. The lack of Dolby Vision always has been and continues to be a shame. HDR10+ is technically very similar but far less well supported, with only a handful of 4K Blu-rays and a chunk of Amazon Prime content (which is also generally available in Dolby Vision) offered in the format. It’s not, though, a reason to not buy the Q70R.

Alongside Amazon Prime Video, the Q70R offers subscription-based streaming via Netflix (also in 4K and HDR) and Now TV (HD at best), as well as pay-as-you-go movies and TV through Google Play, Rakuten and Apple TV. The latter offers the most substantial selection of 4K films available anywhere.

These apps are made available via the best operating system in the business. Clearly laid out and snappy in use, it allows you to get to the content you want in no time.

Picture settings are simple and straightforward, too, and the TV needs next to no tweaking in order to look its best: the Eco Solution settings need switching off, of course, and the Adaptive Brightness, then for 4K HDR we simply turn off the Digital Clean View (noise reduction) feature and select our preferred motion processing mode, Custom, though others might prefer turning it off entirely.

It’s a slight shame that the TV forces you to choose a compromise when it comes to motion, but Sony remains the only brand to have properly nailed this particularly tricky aspect of picture processing.

Compared with most TVs, the Q70R’s Custom mode – left on its default Blur Reduction and Judder Reduction settings of 10 and 3 respectively – does a good job sharpening and smoothing motion without introducing the dreaded soap opera-like over processing.

Only occasionally do you notice a smidgen of artifacting around very tricky bits of motion. Crucially, there’s no difference in the way the Q70R handles motion compared to the much more expensive Q90R.

In overall performance terms, the Q70R is very much a Q90R lite – in the best possible way. It lacks the flagship TV’s extra helping of picture whizz-bangery, most noticeably in terms of brightness and local dimming, but delivers a lot of what makes the Q90R great, only at a much lower price.

Looking at the night-time cityscape at the opening of the 4K Blu-ray of John Wick: Chapter 2, it’s clear that the Q70R lacks the Q90R brightness peaks (the Q70R is rated to around 1000 nits while the Q90R is 2000 nits) and close contrast control (the Q70R has only a fraction of the Q90R's number of dimming zones), but against similarly priced rivals the dynamism on offer is spectacular.

Blacks are deep for a backlit set and the thousands of lights from the buildings, cars, streetlights and billboards stand out proudly from the gloom around them. The garishly pink frontage of a Victoria’s Secret shop is fabulously punchy, while its reflections in the wet tarmac illustrate good subtlety of shading.

When the action moves to a dimly lit office, it becomes clear that the Q70R’s blacks are fairly detailed as well as satisfyingly deep, and that skin tones, while a little warmer than truly neutral, are nuanced and generally natural.

It is worth noting, though, that the Q70R lacks the Q90R’s wide viewing angle tech, and that means colours wash out somewhat when the TV is viewed off axis. It’s no worse in this regard than other, similarly priced backlit TVs, but is worth bearing in mind all the same.

Detail and definition are exceptional. Edges are razor sharp without looking artificially enhanced, and every bristle of a henchman’s fabulous handlebar moustache is clearly visible.

Switching to the 1080p Blu-ray of The Hateful Eight, the Q70R remains a very satisfying performer. Again, this isn’t as bright a performance as that of the Q90R, which means the snow isn’t as crisply white, but the general balance in terms of colours and contrast is more or less the same. As is the way the image is upscaled delicately, preserving the essential filmic quality of Tarantino’s grim Western.

Switching to Bargain Hunt in standard definition (the things we do in the name of testing), the Q70R sensibly plays things fairly cautiously, resulting in colours that are a little subdued next to some, but avoid the far spikier pitfall of garish over-exuberance.

LG’s OLEDs remain the masters of upscaling these very low resolution signals, delivering almost impossible smoothness and clarity, but the Q70R is as clean and controlled as its flagship sibling and perfectly watchable in its own right.

It almost goes without saying at this point that even the best sounding TV can be beaten for audio quality by a decent soundbar. But if you absolutely insist on using the built-in speakers, the Q70R is decent enough, with plenty of clarity and projection through the midrange.

That said, it is lacking somewhat in the bass department and isn’t exceptionally spacious in its delivery, even with the worthwhile Adaptive Sound turned on.

For everyday TV viewing, the sound is perfectly acceptable, but the best sounding TV around this price comfortably remains the Sony KD-65XG9505.

Those looking for a premium performance at midrange money simply have to check out the QE65Q70R. It lacks the cutting-edge specs that make the flagship Q90R so spectacular, but the Q70R’s downgrades are sensibly chosen and the result is a Q90-lite performance that’s excellent for the money.

Throw in the best operating system money can currently buy, and the most substantial selection of apps available anywhere, and you’ve got a real belter of a midrange TV.