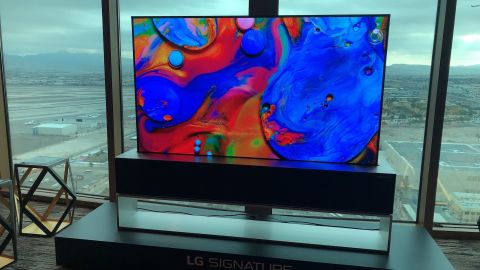 Las Vegas isn’t short of high-rollers, but we didn’t expect one to be 65 inches and the talk of the tech world at CES 2019.

Alongside an 8K model and its new range of conventional OLED sets, LG unravelled the world’s first rollable 4K OLED TV in front of the massed media.

The LG Signature OLED TV R isn’t just a 65in TV, it’s also a piece of furniture. When completely retracted, the TV lives inside a large aluminium stand. It stretches out the full width of the TV and then some, so you'll need a bit of space to accommodate it.

On top of the stand there’s a motorised cover that runs along its entire width. Fire up the set and it slides back to allow the TV to rise. Peer around the back and you’ll see a ridged construction attached to what appears to be a brace that criss-crosses across the back of the screen. Presumably this helps maintain rigidity when the panel is fully extended.

You can fix the OLED screen in three different positions: Full view, Line View and Zero View. Full View is when the TV’s fully extended and you’re using all 65 inches. Line View drops the TV so there’s just a strip of OLED screen visible. In this position you can navigate through a handful of different displays.

LG has widened eyes at #CES2019 with its first ever rollable TV pic.twitter.com/UntRlQHhERJanuary 7, 2019

There’s a clock and weather display, you can also use the screen to showcase photographs from a smartphone and it can also show track information when used as a wireless speaker. Finally, Zero View is what LG calls it when the TV is completely hidden away in its stand.

So where are the speakers you might be wondering– well, there's a 4.2ch, 100W Dolby Atmos soundbar located inside the stand. When you’re not watching TV and the screen is retracted, the stand can be used as a large wireless speaker via Bluetooth.

All your connections can be found lined up on the rear of the stand. There are four HDMI inputs to 2.1 standard. This means the the TV is ready to handle high frame rate (HFR) content and is fully compatible with eARC. Support for variable refresh rates is also included.

Despite its snazzy form factor, the Signature R OLED TV doesn’t boast any major picture processing advantages over the rest of its 2019 OLED siblings. It uses LG's latest second-generation Alpha 9 processor, identical to the one in the OLED65C9, and so takes advantage of LG's new AI Picture and AI Sound processing.

AI Picture is a two-step process whereby the TV consults an internal database of content and uses it to compare to the incoming signal before it decides how best to process the picture.

The second step involves a new ambient light sensor which can adjusts the TV’s tone mapping curve in real-time based on your room lighting. If you’re watching SDR content, the TV adjusts the overall panel brightness, but if you’re viewing content embedded with HDR, the TV can take even greater control over how the OLED panel reacts to the content it’s displaying.

AI Sound relates to how the TV treats a standard stereo signal. The set uses special audio processing to turn it into virtual 5.1 surround sound and it can also alter the sound depending on the type of content.

Apple AirPlay 2 support is built into the Signature R, but unlike Samsung’s 2019 TVs, iTunes isn’t. LG insists that won't stop you enjoying Apple’s 4K content on the R in both Dolby Vision and Atmos, but hasn't yet explained exactly how you'll be able to access it.

The Signature R features the latest version of WebOS which has the same familiar look and feel as previous iterations but with a couple of minor tweaks. The tiles in the Launcher Bar, are slightly shorter in stature and you can also preview content in compatible apps such as Netflix without having to open them. Provided you’re logged in, over time, the TV will be able to display new and favourite content when you hover the on-screen cursor over the relevant app.

Besides being rollable, the biggest difference between the Signature R and other OLED models is the remote. The rollable TV gets a brand new design – a slender aluminium affair which looks and feels much more premium than the normal Magic Remote. It feels solid and weighty in hand and nice to use in the short time we have with the TV during an LG demo.

We watch a range of standard 4K demo footage, including cityscapes at night, with the brightly lit buildings punching through the dark night sky.

The picture is glossy and punchy, rich in detail and with little noticeable noise. Switching to a daytime scene, we are treated to piercing blue skies and a vibrant, yet nicely balanced, palette. When playing a number of slow, deliberate pans, the R9 copes well.

The music accompanying the stock images was hardly what you’d call blockbuster, but when a row of R series sets on the LG stand were synchronised to appear from their stands to a classical tune, they fill a huge space – while also contending with the chatter of hundreds of tech journalists.

A soundbar is never going to be as good as a dedicated surround sound system, but LG's solution appears to make a decent fist of it.

Of course the big question mark hanging over the R is price. How much would you be willing to pay for a rollable TV when, in theory, you can get a similar level of picture performance further down LG’s range. For example, it’s likely that a 65in C9 will be significantly cheaper than the R.

But if you really want the wow factor that the rollable TV brings, perhaps the price doesn't even matter.