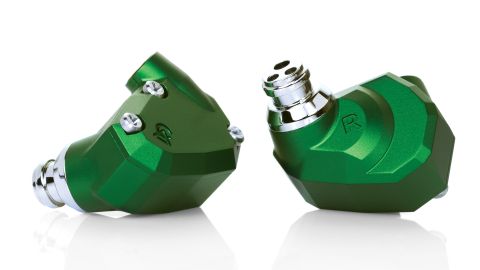 The Campfire Audio Andromedas have high-end looks and a range of great finishes, but they lack a cohesive, musical sound

The residents of Oregon’s largest city have a common goal – you’ll see the motto written on walls or car bumpers: Keep Portland Weird. Known for its parks, micro-breweries, chainsaw-wielding soccer mascots and unashamed kookiness, Portland is where our emerald green Andromeda in-ears are made.

The box proudly displays ‘nicely done’ in embossed caps as we open it. These in-ears cost over one thousand pounds though. Yes, Campfire Audio is in the Keep Portland Weird camp, all right.

Originally released in 2016 as the fifth model produced by the dedicated in-ear makers, the Andromeda in-ears have received a new streamlined body and ‘smoky’ litz cable in a recent refresh. An exhaustive selection of 11 different pairs of tips in three different materials accompany the jewel-like in-ears.

With that four-figure price tag, the Andromedas place only a surprising joint-fourth in terms of the most expensive in-ears the company currently produces. Campfire Audio’s most expensive custom-fit Equinox and gold-plated Solaris models will set you back a further £400.

The theory is that by ditching a traditional tube and filter design, TAEC tech claims to allow an expansive treble and superior clarity. Whatever the physics behind the build, the shells feel well engineered and lovingly crafted in our hands.

Once on, they’re comfortable and secure in our ears, without needing to change the pre-fitted ‘marshmallow’ tips. The various tip options are thick and generous – there’s been no scrimping on the extras here. You even get a little Campfire Audio lapel pin and a cleaning brush inside their leather travel case.

The cable is docile and in no way cumbersome, curling neatly around our ears and staying put as if it just wants to be there.

While we tried out the Andromedas with a variety of sources, from an iPhone upwards, most testing was conducted via an Apple MacBook with a Chord Hugo 2 taking on DAC and amp duties. A pair of headphones at this end of the market, even one of the in-ear variety, demands this level of source componentry.

We stream British Sea Power’s International Space Station on Qobuz at CD quality and the cyberspace-sounding guitar reverb that pre-empts the initial drum fill plays gleefully around our right ear before giving way to a driving and easily-handled bass; open yet ruled with an iron rod.

The ambient keys soar up through a sparkling, sensitive treble and Yan Scott Wilkinson’s airy, pensive vocal is detailed and well presented. These in-ears are ultra-sensitive, too. The listed 112.8 dB SPL/mW sensitivity means that, if and when you do take the Andromedas out and about, they’ll be far less of a drain on your portable device’s battery than most in-ears.

But while each musical strand sounds majestic in isolation, they aren’t being particularly well interwoven. British Sea Power is a band known for its layered, ambient and detailed soundscapes, but the performance here is not meticulously cohesive.

It’s a tiring listen on occasion and the overall effect is often one of confusion, with sonic elements out of place, unmusical, or not quite marrying up to the output of its four driver partners.

We stream Dungeon Family’s album Even In Darkness to see how the Andromedas deliver this kind of bass-heavy rap. These in-ears are prize heavyweights when it comes to excitement through the bass. In Follow The Light, CeeLo’s voice is underpinned by a regimented bass, and it sounds similarly energetic; rich in textured sass.

The sound lacks focus, which is an odd feeling. It’s like they’re tantalisingly almost right, but wrong enough for us to hear it. This lack of unification – the shortfall of focused delivery that makes his lyrics funny – seems to come from driver units that aren’t seamlessly integrated in the way that they work. The drivers just don’t sound like they’re quite blending properly.

We stream Alexander Scriabin’s Etude In C-Sharp Minor, Op 2, No 1 played by Garrick Ohlsson on Spotify Premium, and while the treble sparkles and fizzes, there’s a slight harshness to the upper midrange as Ohlsson caresses the piano that creates an unintended aggression.

Any modicum of edginess in the midrange of a recording is taken and shouted out by the Andromedas, so there’s an emphasis that detracts from what was intended by the pianist.

In terms of comparison, Shure’s talented SE846s (originally tested at £950 and now available for around £800) are more complete performers, delivering musical cohesion and sonic refinement that the Campfires can’t match.