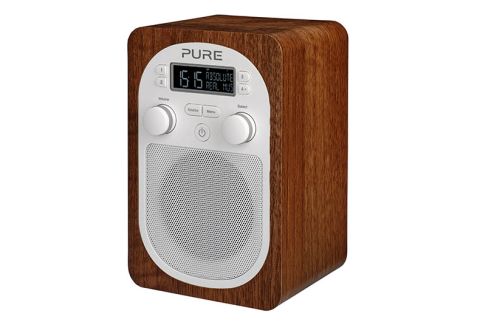 Place the new Pure Evoke H2 radio next to its predecessor, the Evoke D2, and you’d be hard-pressed to tell them apart. Both radios have identical faces and controls.

So, what changes have been made? According to Pure’s engineers, the H2 has less distortion in the lower frequencies.

This is through tweaking the circuitry, as well as using an ABS composite cabinet (rather than the MDF used for the D2) with internal ribbing to reduce unwanted resonances.

The H2 does sound hollower than the D2 does when you tap its body, so you might fall under the false impression that the H2 is a cheaper model. However, once you’ve listened to it, there’s no doubt this Pure is an upgrade.

The results are subtle, but noticeable. When listening to a digital radio station, the bass bloom that can be heard on the old D2 is significantly reduced on the H2, providing greater clarity in the midrange.

This makes listening to radio presenters, or airy, vocal-focused songs like The Drums’ Let’s Go Surfing, more enjoyable. Jonathan Pierce’s breathy lyrics sound a little lighter and more open, which means its 8cm driver can better convey the juvenile innocence of the song.

The bass also sounds more efficient. Deep tracks erring on the soft side when played on the D2, like the ones on the soundtrack to Christopher Nolan’s The Dark Knight, are rendered with a more defined edge.

The low-frequency pulses and booms in I’m Not A Hero are better textured on the H2, but the radio doesn’t make the mistake of needlessly tilting its tonal balance towards them.

And happily, the things that the D2 did well are still in the character of the H2. This new radio is still insightful, with a lot of depth throughout the frequency range, and remains impressive for a £100 product.

The wooden finish on the H2 comes in two varieties, oak and walnut, and its finish looks just as good as the D2’s.

Round the back is a telescopic aerial and a variety of connections: one for its mains power plug, one for a 3.5mm auxiliary input, and a mini-B USB slot for software updates. There’s also a 3.5mm headphone output too.

Once you’ve got it plugged in, the H2 will begin autotuning without any issue; you can preset up to 20 FM or DAB radio stations, with three quickly accessible by dedicated buttons on its face – the rest are accessed by the ‘4+’ button, and then turning the ‘Select’ dial.

The radio also has a built-in clock that can be set to wake you up with a specific tone or radio station, a sleep timer, and a kitchen timer that sets off an alarm after a set countdown.

The external design is the same as the D2, which means it receives the same criticisms.

The button presets aren’t particularly good if you have more than four favourite stations; the display – which we called old-fashioned back in 2013 – could probably do with being modernised; and though the battery pack at under £30 is relatively cheap, it is still almost a third of the cost of the radio itself.

Despite being so similar to its previous incarnation, the H2 is certainly a more refined product.

Its greater clarity in the midrange and bass, without negatively affecting the detailed, solid sound, is to be lauded.

Right now, it will take something really impressive to knock the Pure Evoke range off its current pedestal.