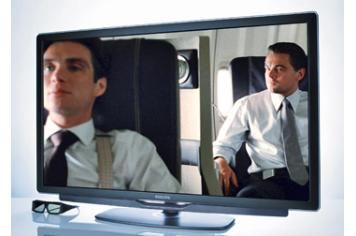 Plenty, it seems, at least in the case of the Philips 46PFL9705 – if even a fraction of the promised perfection is actually delivered, we'll find ourselves not so much reviewing a television as sparking a philosophical row with Plato.

A feature set to die for
In some respects, the 46PFL9705 could only be a Philips TV. The Dutch company isn't alone in producing good-looking, beautifully finished and entirely covetable televisions with integrated wi-fi, but it goes its own way where features like Ambilight (present here across the top and down the sides of the rear of the screen) are concerned.

Most screens at this price and size have a high-definition TV tuner (or two) on board – but the 46PFL9705 goes without. And when it comes to picture adjustability, it's mind-bogglingly tweakable.

Why not have a good fiddle with the 400Hz Clear Motion sub-menus? Or the numerous other enhancements in the endless on-screen list?

It's a good job the Philips remote is the nicest to hold in this test, because you might be grasping it for a while.

Standard-def tuner is coarse
Once finally set up, it's probably best not to start your 46PFL9705 experience with television broadcasts. The Philips' standard-def-only tuner is coarse, lurid, noisy and edgy, and the screen's compelling ability with motion doesn't begin to compensate.

In fact, you might want to steer clear of DVD upscaling for a while, too. Motion, of course, is exemplary, and images are detailed, high-contrast and enjoy an Ambilight-assisted depth of field almost unrivalled. But there's more noise in evidence than is really acceptable and hesitancy where edge-definition is concerned.

No, it's far better to start with Blu-ray. Our copy of The Golden Compass looks splendid in the Philips' hands: bright and detailed, with informative and nicely varied blacks and clean whites.

Motion is, again, beyond reproach and the smooth edges, convincing textures and beautifully varied colour palette make for gripping viewing. The sense of depth the 9705 offers can be startling.

Up the ante again with some 3D material (Philips includes two pairs of glasses and the external sync-bar in the price) and the 9705 impresses again.

Ambilight technology
It seems that Ambilight technology has just been killing time until 3D's arrival – at a stroke it counteracts the inherent dimness of 3D pictures and creates an impression of depth that can't be touched by a single rival here.

It's not immune to cross-talk, though, which is particularly evident when the screen is showing moving objects in the extreme near field.

In short, then, the Philips 46PFL9705 isn't much of a television – but it is a really fine display for your HD and 3D sources. It's also quite nicely balanced and unexpectedly weighty where sound is concerned. But it's not perfect.