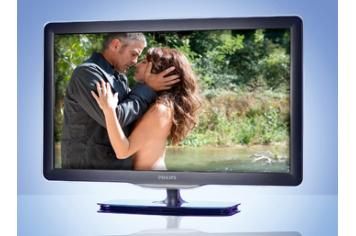 The Philips is very close to being a fabulous TV, but it falls at the final hurdle with a few motion and picture issues

While some manufacturers seem to pick and choose the features and functionality with great care, we're not quite sure what others are thinking. So let's be clear here: Philips, we're looking at you.

The PFL7605 offers you only a standard Freeview tuner. That's fine if you happen to own a high-definition-capable set-top box already; but when the bulk of your rivals are offering at least one, if not the choice of two HD tuners, it does appear a little miserly or forgetful. After all, this isn't exactly the cheapest 32in television around.

We'd prefer a hi-def tuner or two
Instead of the extra tuners, you're given features such as NetTV, where in addition to being able to access media content from various online sources, you can also surf the web.

It's a novel touch, but it's no substitute for a home PC, laptop – or even iPad for that matter. In our opinion, the user would get much more mileage out of a high-def tuner. But enough of that – we've probably got the point across by now.

That criticism aside, it's good to see that this Philips set produces one of the more striking and distinct images in this test.

Even when you're watching standard definition channels on Freeview, there are certain moments where the Philips stands out from the crowd thanks to its incredibly insightful nature.

A touch of picture noise
Still images look particularly sharply drawn. It's a shame though, that the TV suffers from the occasional lapse in concentration, when picture noise and instability creep in.

Similar, contrasting moments are present with DVD and Blu-ray content too. During The Karate Kid, as Dre trains on the Great Wall Of China with Mr Han (as you do), edge definition is pin-sharp, and the impression of depth is something to behold.

But, for all this apparent brilliance, there is the odd moment where motion produces the slightest trace of judder and flicker. This effect isn't as extreme as it is on some rival TVs – but it can't be ignored. You can try to alleviate the issues by turning on the TV's HD Natural Motion picture-enhancing technology.

In practice, though, if you do that, the image looks anything but natural, even on its lowest setting. In fact, there's something spookily unnatural about how motion is processed.

Fine TV sound once more
The built-in speakers sound reasonably dynamic and dramatic, producing a decent level of clout when action scenes kick in. They and are much more open and expressive than rival sets whose speakers sound strangled and often somewhat thin.

The PFL7605 looks the part, and its performance goes some way to justify that hefty pricetag. But, the absence of a high-definition tuner mixed with slight image inconsistencies leave us with a so close, yet so far four-star verdict.