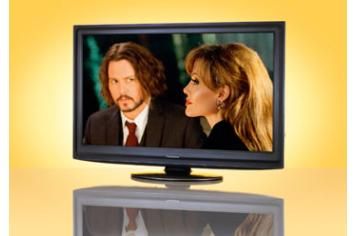 Stunning in some areas, but price and lack of backlight flexibility means the D25 narrowly misses out on five stars

Panasonic is a company committed to plasma, but it also builds a vast number of LCD models, especially at the smaller screen sizes that plasma isn't so suited for.

The D25 is right at the top of Panasonic's LCD range, thanks to its advanced features – edge LED backlighting (with a claimed contrast ratio of 2,000,000:1), Intelligent Frame Creation Pro motion processing and both a Freeview HD and Freesat tuner.

Fine build, and good-looking
This is a heavy TV, built with premium materials. It's got interesting styling, too, in the form of a rather industrial, gunmetal grey fascia with some peculiar ridges.

While we're on the subject of styling, it's worth pointing out that the TX-L37D28 is essentially the same as this D25, but with a pedestal that allows for a 15 degree backwards lean, should such a thing take your fancy.

When it comes to the picture, you have a choice to make: do you turn the C.A.T.S. (Contrast Automatic Tracking System) on, which results in a slightly dull picture, or off, raising the backlight up to rather aggressive levels?

A choice of picture processing
For our money the latter option is the better, as C.A.T.S. is just that bit lifeless; but manual control over backlight levels would almost certainly have made it possible to achieve a nice compromise.

As it is, when you play the First Flight chapter of the Avatar Blu-ray, the already bright picture is just a little in-your-face, and black levels are weakened as a result.

The black bars at the top and bottom of the screen are on the grey side, presumably thanks to the over-brightness of those LEDs around the edge, and on our sample there was a small blotch of excess light near the bottom-left corner.

Punch with your picture
Still, if it's punch you're after, you certainly get it here, and in a lot of ways the picture is excellent.

For a start, detail levels are brilliant, and edges are drawn with pin-point precision: the Avatar disc looks great on most displays, but the Panasonic manages to take it to an even higher level of crispness.

It handles motion well, too. True, the motion processor isn't quite as precise as leading rivals, but it is equal to that highest of benchmarks when asked to grip difficult patterns during pans.

There's a little more ghosting around fast-moving objects when you switch to DVD, but again, the picture is generally excellent, with crisp detail and balanced colours.

That upscaler combines with the two tuners to provide exceptionally clean, solid Freeview and Freesat pictures, and HD channels are detailed and very vibrant.

Decent sound and internet suite
Add decent sound and a suite of internet widgets that now includes on-demand streaming of all the latest movies from Acetrax, and you've got an accomplished TV set.

If it was a bit cheaper and had a backlight setting that provided a middle ground between brilliant punch and deep blacks, it could well be a winner.