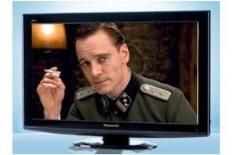 There isn't the space to get into the minutiae of Panasonic's extensive flatscreen model range here.

Let's just say it runs from fairly cheap to flipping expensive, and it encompasses both LCD and plasma models.

This is one of the more affordable of its 1920 x 1080 models, but that doesn't mean it's anything but pricey compared to some of its peers.

Workmanlike set up
Specification is appropriate for a 32in screen at this sort of money, though, and while the relatively dumpy looks won't make up a wavering customer's mind, the Panasonic does at least feel built to last.

There's more of this sensible, workmanlike approach with on-screen menus. Bringing this screen to full readiness couldn't really be much simpler.

Where TV reception is concerned, though, you may wonder if even that modicum of effort is worth it.

Watch our vidcast about this TV

The Panasonic pulls off the by-no-means straightforward trick of being simultaneously coarse and soft with standard-definition broadcasts, leaving faces choppy around the edges, but short of detail and character in the middle.

It's suspect, too, where motion is concerned, the picture as soft and smeary as butter left out of the fridge too long. Colours are vibrant and believable, though, and white tones are nice and clean.

A mixed bag with DVD
It's also a mixed bag where DVD upscaling is concerned. There are restless edges and picture noise in all but the most undemanding scenes, which rather negates the rich, varied colour palette and strong contrasts.

The softness, at least, is banished, leaving instead a pleasing level of fine detail.

We've been tempted all right, but have managed to hold off from using the word ‘underwhelming' until now – but that's the way 1080p/24fps images look.

In the Loop enjoys all the usual high-definition benefits (fine detail, impressive depth of field, splendid skin-tones, good contrasts and colours) but motion isn't the smoothest and there's some digital noise apparent in more complex scenes.

We weren't expecting great things in terms of sound and, sure enough, thin and unyielding is the order of the day.

We were, though, expecting a little more sparkle and a little more out-and-out picture fidelity from a screen at this price, from a company with this track record. So we're disappointed.