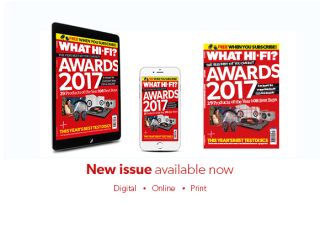 2017 double-downed on everything 2016 had to offer. We are talking about the advent of smart speakers, and now they're in everything from fridges to alarm clocks.

We lamented the loss of the headphone jack on iPhones, and now we're losing bezels altogether on smartphones and TVs. Dolby Vision arrived to make our projectors look even more impressive (and we might even see 8K coming on the horizon).

But one thing that you can rely on, unchanging and absolute, is the rigour of the What Hi-Fi? Awards. From the established hi-fi kit such as speakers, amps, televisions, and headphones to the connected world of soundbases, streamers and multi-room systems, if it's worth hearing then we've heard it.

Our Best Buys, in every category, have already hit the world wide web, but that might not be good enough for readers who want the crème de la crème - our Products of the Year.

If you need to know what to put on your Christmas (or Black Friday) list so that Santa Claus can stick it under the tree, you won't want to miss out. Below are just some tasters of the products we've been putting to the test...

It wouldn't feel like a proper Awards night without a Denon microsystem making an appearance, and sure enough the D-M40DAB pops up once again.

Joining it are systems from Revo Supersystem and Naim Uniti Atom, both of which are phenomenal performers in their respective price brackets.

But taking place as Product of the Year, is the KEF LS50 Wireless - you get a dedicated streamer, a Bluetooth module, 24-bit/192kHz DAC, preamp and four power amplifiers with a total of 460W of output. There are few manufacturers that can compete with that.

2017 is the year of the OLED and LG’s OLED55B7V is our Product of the Year, followed by Sony’s KD-65A1 (based on an LG OLED panel). Both televisions have well balanced, natural pictures that don't skimp on the punch in their price range.

Sony also grabs another Award for the £1200 4K KD-49XE9005, which has great sound and a range of streaming services too.

When it comes to squeezing the most out of your music, a good external digital-to-analogue converter is essential. Enter five of the best bits of kit we've had the pleasure of listening to.

At the affordable end of the spectrum is Cyrus' soundKey - but don't let its diminutive statue fool you; it's capable of turning your mobile listening into an authentically high-fidelity experience.

Rising through the ranks, at £170 is the supremely compact DragonFly Red from Audioquest, and at £400, the Chord Mojo takes home the gold for its organisational skill and overall cohesion that makes it stand out from the crowd. Chord's 2Qute follows swiftly behind.

But right at the top, winning Product of the Year, is the Chord Hugo 2 (£1800). There simply isn’t another DAC around able to communicate so unambiguously or so effortlessly the spirit of your music. Those with the cash can't get better than this.

For a great pair of headphones when you're out and about - especially if you want something compact enough to fit in your pocket - then these in-ear headphones are for you.

From Beyerdynamic's Byrons and Sennheiser's Momentum M2s comes the proof that you don't need to spend a lot of money to get great sound - and the Momentum M2s win our Product of the Year Award once again.

But if you do want to venture a little deeper into your wallet, then Shure's SE425s (£240) are the ones we'd recommend. And at the top end, the AKG N40s are a £350 pair of cans well worth their price tag. So, give these in-ears some high-quality audio as soon as you can.

Of course, as important as the Awards are, there are always new products being announced, so we've added a smattering of new tech to this issue.

And speaking of Amazon - or more specifically, Alexa - we've had our hands on Sonos's new speaker which has the smart assistant built in. The Amazon Echos, while impressive, have yet to had a strong handle on sound quality, so could this be where Sonos takes the lead?

You'll have to pick up the new issue to find out...