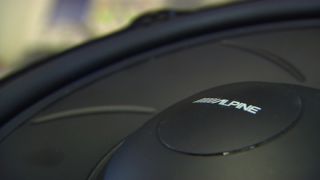 Hot on the heels of GM's use of noise-cancelling technology to reduce fuel consumption, which I wrote about over the weekend, comes news of an innovation from Volvo and Alpine designed to make subwoofers both much lighter and remarkably less power-hungry.

Launched in the Swedish company's Concept You (above) – which makes its debut today at the Frankfurt Motor Show and is described as 'the next bold step in the evolution of [Volvo's] next luxury car – is a new subwoofer design weighing just 1.5kg (rather than anything up to ten times as much for conventional in-car subs), and requiring just 2W to give the same output as a normal 200W sub.

For all that, it's still capable of delivering over 120dB inside the cabin of the car.

The new Volvo's Alpine system uses the Fresh Air subwoofer, co-developed with Australian company Blueprint Acoustics, and said to 'use the boundary of the car to create the ultimate listening experience.

'It interacts with the air outside the vehicle to improve efficiency – which means that the surrounding atmosphere becomes an external “box” and the car itself acts as a separator.'

But in case that makes it sound like one of those nightmare cars you can hear approaching from a mile away from the thudding of its bass, or that shakes your rear-view mirror when it pull up behind you in traffic, nothing could be further from the truth.

Volvo's Markku Mulari says that ' Our aim is to keep the sound inside the car, no matter if it is a massive bass or a telephone conversation.

'The FreshAir subwoofer can produce excess of 120 dB inside the car, but the pumping bass is much less present outside the car compared to a conventional sound system.

'Good news for car buyers who love great sound, bad news for kids that love to drive around and making the windows in the neighbourhood vibrate.'

OK, so I'm not sure those 'kids' do that in Volvos – more likely to be elderly BMW 3-series held together with window-tint film, or Citroen Saxos with a bootful of amps and speakers – but you get the idea.

The system also uses mid-woofers and compact Omni-speakers for the high frequencies, to deliver what Mulari calls an 'ideal sound experienced like a three-dimensional body in the car.

'You could call it an “acoustic hologram”. The sound should be so natural that it feels like your favourite performer is physically present.'

In addition, the Concept You draws on smartphone and tablet technology in the form of touchscreen controls, as well as a head-up display on the windscreen.

There's one touchscreen on the upper part of the centre console, another between the rear seats for passenger use, and even the control paddles on the steering wheel are made from aluminium and glass, and incorporate their own touchscreens.

It's all part of what Volvo's Vice President Design, Peter Horbury, calls 'our search for the ultimate intuitive car that makes the owners manual a thing of the past.

'Smart phones and smart pads have brought mobile infotainment into a new era. Here, we use a number of touch screens to replace buttons and controls in order to make the driver totally connected, totally in control. The technology also helps us to create a refreshingly uncluttered interior.'

The main touchscreen in the centre console not only remains in sleep mode until the driver looks at it, but can also change its function according to how it's approached: a hidden infrared camera registers eye-movement, while another sensor detects hand-movement, and tailors the functionality of the screen accordingly.

It can even decide whether the driver or passenger is about to use it: Horbury explains that 'Certain functions, such as surfing the web, are only accessible from the passenger side while the car is rolling. The technology knows who is the present operator and adapts itself automatically.'

It seems that while GM is showing it can learn from the audio world, when it comes to intuitive operation there's room for some traffic back from the automotive industry to consumer electronics.