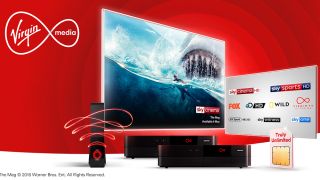 The owners of Virgin Media and O2 could be teaming up to create a new TV and mobile service in the UK, The Guardian reports.

The director of Liberty Goal, the telecomms company that owns Virgin Media, and O2 owner Telefonica are supposedly in talks to merge their assets.

Such partnership would bring together the 33 million customer base of O2, the UK’s largest mobile network, and Virgin Media's six million cable and three mobile customers, putting a joint venture in a strong position to challenge media giants Sky and BT in the UK.

With Liberty Goal also owning a 10 per cent stake in ITV, it is uncertain whether the British broadcaster would be included in a deal.

Negotiations are under way, with Telefonica confirming today that "the process started between both parties is in the negotiation phase, with no guarantee, at this point, of its precise terms or its probability of success".

Two sources familiar with the matter have also told Reuters that talks are ongoing.