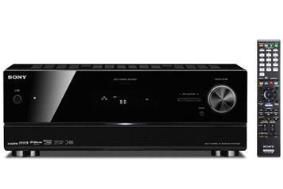 Selling for about $500 (£325) when it hits US shops in June, the new model has HDMI 1.4 capability, supporting 3D video from connected devices and passing them through to a 3D compatible high-definition television, and decodes all the current high-resolution audio codecs.

Delivering 7x110W, the new model also has a couple of features new to Sony receivers: that HDMI 1.4 capability gives it Audio Return Channel, allowing sound from an HDMI-connected TV to be sent back to the receiver without the need for an extra digital or analogue connection.

Meanwhile standby HDMI pass-through allows signal to flow through the receiver even when it's not in use. That means, for example, that you could watch your satellite TV box or Blu-ray player, with sound coming from the TV speakers, on those occasions when you don't want to switch on the full surround system.

The receiver also has DLNA-certified WiFi client capability, allowing it to stream music from a networked computer.

Other facilities include four HDMI inputs, Sony's Digital Media Port for portable devices and wireless/Blutooth connection, and wireless Zone 2 capability using an optional S-AIR transmitter and powered speakers. Using this, up to ten additional rooms can be fed with music.

Three other new Sony receivers are due in US shops next month, and feature HDMI 1.3 inputs, but an HDMI 1.4 output, thus allowing them to offer the Audio Return capability, but not 3D passthrough.

No details have yet been announced regarding UK availability or pricing.