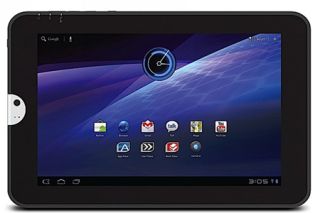 More tablet news, this time from Toshiba, which has announced that the 10.1in AT100 Android 3.1 tablet (aka the Thrive) will be available in the UK from September 1st.

The plethora of connectivity options mean that files can be transferred directly to the device itself – a big bonus for those who yearn for more productivity out of their tablet devices.

Front and rear cameras
16GB of built in storage should be enough to deal with the 2MP and 5MP snaps taken with the front- and rear-facing cameras, while a hefty 1GB of RAM should ensure things run smoothly.

Options include the AT100 multi-dock which enables HD video playback via HDMI on large-screen TVs.

No word on pricing as yet, but we’ll be sure to keep you updated as always.