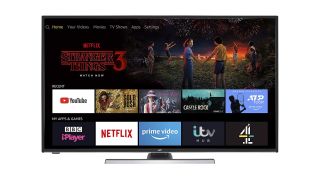 Want to kick 2020 off right with a brand-new TV? Amazon currently has a fantastic deal on a 40-inch JVC 4K TV with Amazon's Fire TV streaming platform built-in.

The JVC Fire TV Edition Smart TV is enjoying a 24 per cent discount, now just £249. That's a great price for a TV of this size – not to mention one that's so streaming-savvy.

We haven't reviewed this particular set, but if you're after a cheap 40-inch TV that has built-in access to plenty of streaming apps (negating the need for a plug-in streaming stick) this JVC could well be the TV for you – especially at this tempting price.

There's direct access to Netflix, YouTube, Prime Video, BBC, ITV, Channel 4, Disney and more, plus Alexa voice control via the supplied remote. And not a given at this price or size, this JVC also supports Dolby Vision HDR in addition to the more typical HDR 10 and Hybrid Log Gamma (HLG) formats.