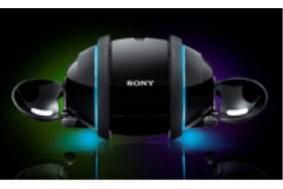 Already hailed by our friends over on Stuff magazine as 2008's 'Cool Toy of the Year', and star of a hundred and one YouTube videos, the Sony Rolly looks to have a bright future.

So, what is it? Well at it's heart it is a portable MP3 player, with 2GB of storage space for MP3 and AAC files plus built-in Bluetooth connectivity that allows you to wirelessly stream music from a mobile or PC.

But the little blighter's obvious trick is its ability to dance, Peter Crouch-style, as it plays your music. Thanks to six moving parts – arms, shoulders and, err, wheels – Rolly can spin, wave and generally look like it's wigging-out to your tunes.

Rolly can play five hours of music or four hours when combined with some dancing action. The gizmo also comes bundled with software called Rolly Choreographer, which allows you to tailor-make dance routines.

Another nice touch is the ability to shuffle your tunes by simply shaking the whole device... If you fancy a shake, rattle and Rolly, you'll be needing £249. Head over to the SonyStyle store for more info here.