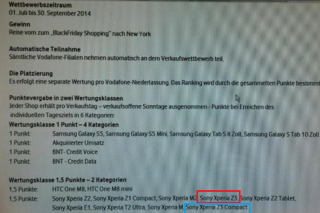 An image has leaked online supposedly confirming the existence of the Sony Xperia Z3 and Z3 Compact. The image in question is from Vodafone in Germany and gives details of a competition the company is having for its employees between July 1st and September 30th.

It's likely the phones will be unveiled at IFA 2014, held in Germany between September 5th - September 10th. Rumours of specs are quite thin on the ground at the moment, however it's expected the Z3 will get a Qualcomm Snapdragon 801 processor, 1080p display and Android 4.4 KitKat. The Z3 Compact meanwhile is expected to get a 2.5GHz quad-core processor, 20.7-megapixel camera and 2GB of RAM.