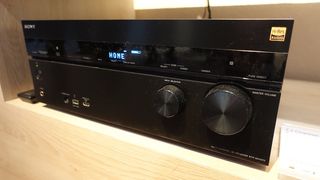 Sony's had a great deal of success with its budget home cinema amps in the past and we've already had a brief glimpse of a new model at CES 2016, the STR-DN1070.

The 7.2 channel amp features a new DSD-compatible DAC which works with high-res audio files played over HDMI, through a USB connection or streamed over a network.

There's your usual smattering of HDMI inputs, all of which are compatible with HDMI 2.0 and HDCP 2.2 copy protection.

Connectivity includes wi-fi, AirPlay, Bluetooth, Google Cast and Spotify Connect, so it looks as though all bases are covered for wireless music streaming.

The amp also works with Sony's Wireless Surround solution, which allows you to connect compatible wireless, multi-room speakers to the amp and use them as rear speakers.