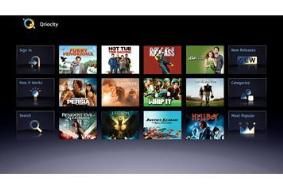 The system allows users to browse, search, preview and select films with a single click of the remote.

New releases and classic favourites are available in standard definition from £2.49 (older content) or £3.49 (new releases), while high-definition content costs £3.49 and £4.49 respectively.

You can register for the service and check news of the latest additions on the Qriocity website.

Yesterday LG added BBC iPlayer to its NetCast web TV service, and prior to that Samsung brought an Acetrax video app to its Internet@TV service.