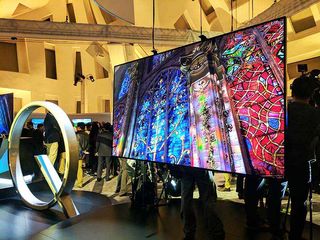 It appears as though gremlins in the software have killed certain Samsung TVs, with users reporting blank screens and unresponsive sets.

Samsung's own forum has a post entirely dedicated to the matter. As initially reported by The Guardian, it was thought that the update was affecting only 2017 sets, but some users have reported issues with TVs more than three years old.

Samsung has just released a statement on the matter: "Samsung is aware of a small number of TVs in the UK (less than 200) affected by a firmware update to 2017 MU Series TVs on 17th August. Once this issue was identified, the update was switched off and we're now working with each customer to resolve the issue. Any customers affected are encouraged to get in touch with Samsung directly (0330 7267864). We would like to apologise for the inconvenience caused to our customers."

The ranges mentioned on the forum post are Samsung's MU6100 and MU6409 4K TVs and the F5500 Full HD line. Symptoms also include TVs being stuck on one channel, not turning on, being stuck on the TV's home screen and not responding to remote control commands.

It's not been a great end to the week for Samsung - the head of the company, Lee Jae-yong, has just been sentenced to five years in prison for corruption.

If your TV has been affected please comment below stating its model number and the issues you're experiencing.