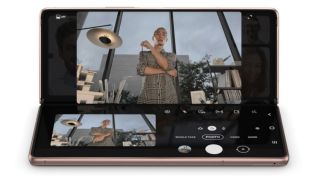 After much teasing and trailing, the Samsung Galaxy Z Fold2 has finally landed. It's available to pre-order immediately (September 9 for Australia, and will ship on 18th September in the UK and US and September 25 in Australia. The only catch is that you'll need £1799 ($1999 / AU$2999) to get on board.

Believe it or not, that's actually less expensive than the original Samsung Galaxy Fold, which launched at £1900 (AU$2899), despite the fact that this latest model has a larger set of screens, a more premium finish and, naturally, more souped-up processors.

The Galaxy Z Fold2 has a 6.2-inch outer screen which opens up to 7.6 inches on the diagonal, designed for those that want the tablet experience in a pocket-sized form factor.

That AMOLED screen has an adaptive refresh rate of up to 120Hz. Users can multi-task with two apps in split-screen or enjoy that full display real estate for video and gaming entertainment.

Samsung has been careful to re-engineer the hinge mechanism after the recall set-back of the first Fold model. While you'll still need to be careful not to get the thing wet, the new CAM hinge has brushes attached to keep the device as dust-free as possible, and maximise protection.

On the inside is a Snapdragon 865 Plus chipset and 12GB of on-board RAM, which together power the Android OS experience. There's 256GB of non-expandable storage and it's also 5G-enabled, of course.

It's the outside where things look more promising, though. The plastic screen of the original has been replaced by Samsung's Ultra Thin Glass which will hopefully add some durability as well as a sense of style.

There is a three-lens camera array on the rear of the device with 12MP sensors for each. The main camera has a f/1.8 aperture lens which, in conjunction with the dual-pixel focusing tech, should help give good results in low light situations. The telephoto lens offers 2x optical zoom and the third set of optics is for ultra-wide shooting.

The Fold2 is available in both Mystic Black or Mystic Bronze colour choices, similar to the Galaxy S20 and Galaxy Note 20. There's also a Thom Browne limited edition (£2999, $3299) that's available from 25th September.