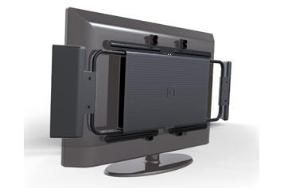 Now, however, Q Acoustics believes it has come up with the ideal solution for those who want to boost their TV's sound, but don't want to go to the expense and hassle of adding a full 5.1 surround sound system.

Called Q-TV2, we saw the first prototype at the Bristol Show back in February. It's now in full production, and will go on sale in the UK from September for £330.

At today's launch in London, full details of the range emerged. Q Acoustics' PR man may have got a bit carried away when he described Q-TV as "the most important invention since electricity, fire and the wheel", but the company is obviously proud of its achievement.

There's 100 watts of amplifcation built in, 50W for the subwoofer and 2 x 25W for the satellite speakers.

In case you're wondering about the vibrations caused by strapping a subwoofer to the back of your TV, Q Acoustics' engineers have thought about that too. The sub is designed to be 'force cancelling', to minimise vibrations from the unit, so preventing any blurring of the picture or long-term damage to the television.

Multiple connection options
You connect the Q-TV2 to your TV either using the telly's headphone jack, phono out or optical digital output, and then simply hook them up to the corresponding inputs on the Q-TV2. The only other thing required is to connect to the Q-TV2 to the mains using the adapter supplied.

There's a switch around the back so you can chose between 'freestanding', 'wall' and 'corner' audio settings depending on where your TV is situated in the room, and there's also lip sync adjust variable up to 180ms.

Inside the subwoofer are four Balanced Mode Radiator (BMR) drive units, with an additional pair in each of the satellite speakers. Q Acoustics claims BMR drivers disperse the sound across a much wider axis than conventional speakers, so giving a wider soundstage across the room.

This is the first version to go on sale, and is designed to fit TVs from 30-42in. In November there'll be a second version, Q-TV2X, for 50in TVs, to be followed by Q-TV3 for 65in tellies and eventually Q-TV1 for smaller screens of 19-26in.

Oh, and in case you're thinking the Q-TV2 will prevent you from wall-mounting your TV, think again. Those clever chaps at Q Acoustics have even designed optional wall and cantilever brackets to go with it.

We'll be receiving our test sample of Q-TV2 next week, so keep your eyes peeled for an exclusive review in What Hi-Fi? Sound and Vision and here on whathifi.com.