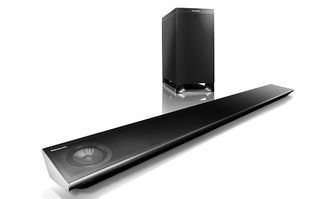 Panasonic has confirmed three new, tidier form-factor soundbars and a 'speakerboard' for 2014.

The new products (the SC-HTB18, SC-HTB480 and range-topping SC-HTB880, which was first previewed at CES) are slim enough to be wall-mounted and, according to the company, represent a big audio advance over the models they replace.

Each model is shaped on a triangular cross-section, designed to maintain a slim, wall-mountable profile while offering sufficient space for relatively large speaker drivers.

The SC-HTB880 features 3D and 4K pass-through, allowing it to deliver 3D and/or 4K images to a suitable display, and is configured to deliver 5.1 channels of sound.

MORE: See all our soundbar reviews

As befits an entry-level product, the SC-HTB18 is a stripped-down affair. 2.1 channel sound, powered by 120 watts of amplification, with a wired subwoofer, the SC-HTB18 is nevertheless Bluetooth-ready (although forgoes NFC).

And for those who’d prefer a physical as well as sonic leg-up for their TV rather than a wall-mounted alternative, Panasonic has announced the SC-HTE180 speakerboard, pictured above (we’ve been calling products like this ‘soundbases’, but no matter).

Designed to support TVs from 42in to 50in, the SC-HTE180 integrates a pair of subwoofers as well as NFC connectivity.