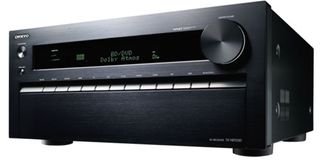 Dolby Atmos is coming to your home cinema, with the news that upcoming Onkyo AV receivers, home cinema systems and speaker packages will support the "next-generation audio format".

The company will also release a firmware update, due in September, enabling Dolby Atmos on its midrange TX-NR636, TX-NR737 and TX-NR838 network AV amps.

Dolby Atmos has so far been limited to specialist cinemas but the sound format is now coming to AV kit, with Onkyo first to market with Atmos amps and speakers, soon to be followed by Pioneer and Denon.

Users will need to add a pair or more of in-ceiling height speakers to an existing surround sound system (5.1, 7.1 or 9.1, according to Dolby) to enjoy the Atmos effect or add Dolby Atmos-enabled speakers to their set-up.

There's built-in wi-fi, with support for DSD and 192/24 FLAC and WAV files, and Bluetooth.

MORE: Dolby Atmos: What is it and how can you get it?