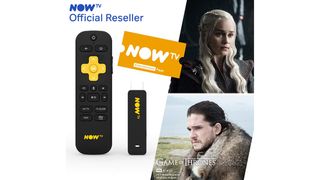 The Now TV stick is available at half-price for Black Friday at retailers around the UK, with a month's worth of programming thrown in.

Technically speaking, it's a free Now TV stick which the likes of Currys are adding onto Now TV's own Black Friday deal. If you go to the horse's mouth, then you'll see some very decent Now TV Black Friday deals live right now, including a one-month Sky Cinema & Entertainment Pass reduced to £14.99 from £20.98. It's the UK retailers that have made it all the sweeter bundling in a Now TV stick for free and it's with them that this deal is best.

NOW TV Smart Stick + 1 Month Sky Cinema & Entertainment Pass £15
For less than the price of a round of drinks, you can now get Sky's NOW TV streamer ("Sky content on a stick") plus one months of the service's film and entertainment content. An unmissable deal, available now for Black Friday.View Deal

As we said in our review, "the Now TV Smart Stick is a product with one simple purpose: to provide you with inexpensive access to content from its parent company, Sky, without the expense of an ongoing monthly subscription. The great thing is that it can also turn your old TV into a smart TV, with catch-up apps for all the major UK channels, as well as YouTube."

As for the Sky Cinema and Entertainment Pass, it gives you access to over 300 boxsets on-demand, blockbusters, classics and live TV from channels you won't get on Freeview, such as Sky One, Sky Atlantic, Sky Arts, Comedy Central, MTV and Fox.

It's £20.98/month once your one-month pass has expired, and as it's contract-free you can cancel anytime. Set yourself a reminder.