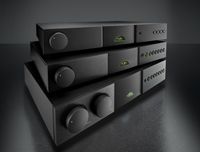 On sale next month is a complete new range of Naim NAIT integrated amplifiers: the NAIT 5si, NAIT XS 2 and SUPERNAIT 2. The three models have been designed with improved power supplies, better components in critical areas, new circuit layouts and built-in headphone amplifiers.

Launching the new amplifiers in Salisbury yesterday, Naim MD Paul Stephenson explained that in recent years the company has been concentrating on the development of its wide range of streaming products.

With those established, and attracting new buyers to the brand, he said, now it was taking the opportunity to look inward at the products already in its portfolio – in this case its line-up of integrated amplifiers.

The new products mark a simpler, even more performance-oriented approach, most notable in the SUPERNAIT 2 , which has lost the digital inputs and separate record/listen selector buttons of the current model.

Instead, all three new models have a common look, increasing in size as you move up the range.

The entry-level model, the £925 NAIT 5si (above), uses a passive preamplifier stage combined with a 60W per channel high-gain power section, up from the 50W of the model it replaces due to the use of a larger transformer and improved power supply.

That output is quoted into 8ohms, the amp being able to deliver 90W into 4ohm loads.

Components have been upgraded in critical areas such as the power amp stage, and all signal capacitors changed to high-quality film types, while the main circuitboard and wiring loom have been improved using experience gained on products such as the DAC-V1.

The toroidal transformer has separate windings for the amplifier and its control electronics, and the amplifier has four analogue inputs – two on Naim's familiar locking DIN sockets, and two on RCA phonos – and a 6.35mm headphone socket. It uses an aluminium chassis and sleeve, with a zinc die-cast fascia.

The NAIT XS 2, which will sell for £1595, again has a power hike over the current XS thanks to a larger transformer: it will deliver 70Wpc into 8ohms and 100W into 4ohms. It has six analogue inputs – four on both RCAs and DIN, one on a choice or RCA or 3.5mm stereo jack, and one powered DIN input for use with the company's StageLine or SuperLine phono stages.

A high-quality dedicated Class A headphone amplifier is also fitted in place of the simpler amp used in the NAIT 5si, there's a USB-mini B socket for updates, power amp in and preamp out sockets allow future expansion, and the amp can also be upgraded with the use of Naim's FlatCap, HiCap or SuperCap power supplies to power its preamp section.

Constant current source circuit techniques are used to provide ultra-quiet drive signals for the switching relays, ceramic heatsink isolators are used to improve sound quality by enhancing heat dissipation, and again components have been upgraded in critical areas, along with the PCB and the wiring loom.

The custom transformer has seven secondary windings to feed the various sections of the amplifier, and the microprocessor controlling the amplifier has been designed to 'sleep' when it's not being used, thus improving sound quality, and then wake as soon as a command is received from the front-panel buttons or remote handset.

There's also an external remote input for use with Naim products offering system automation connectivity. This allows the amplifier to be 'driven', for example, by a Naim network music player using the n-Stream control app.

A simple rear-panel switch is also provided to engage unity-gain/AV passthrough on the NAIT XS 2's AV input, allowing the amplifier to be integrated with a home cinema receiver or processor with front channel preouts.

As already mentioned, the £2750 SUPERNAIT 2 is most notable for the removal of the digital section found on the current SUPERNAIT, Naim explaining that its SuperUniti already fulfils the role of integrated amplifier with digital input in its range, and that the ND series streamers with which the new amplifiers are likely to be used also have digital inputs.

As a result, the decision was taken to concentrate on improving the SUPERNAIT as an analogue amplifier, not least by allowing its power supplies to be further optimised for its analogue stages, rather than also having to run a DAC.

As with the current model, the SUPERNAIT 2 delivers 80W per channel (or 135Wpc into 4ohms) – its larger transformer, with seven secondary windings, is used to enhance the amplifier's dynamic abilities.

The power supply for the preamplifier stage uses Naim's DR (Direct Regulator) technology, also found in the company's latest offboard power supplies, and all inputs are hand-wired, and thus decoupled from the main circuitboard to improve microphonic isolation.

Again the SUPERNAIT 2 benefits from the upgrade of components, layout and wiring throughout, and like the NAIT XS 2 it has a dedicated Class A headphone amplifier, Naim's Electronic Design Manager, Steve Sells, explaining that the amplifier has been designed to drive an extremely wide range of headphone loads.

The SUPERNAIT 2 has the same input provision as the NAIT XS 2 – four on both RCAs and DIN, one on a choice or RCA or 3.5mm stereo jack, and one powered DIN input for use with the company's phono stages –, and also has record and subwoofer outputs, a USB-mini B socket for updates, and the remote input and AV bypass switching also seen on the NAIT XS 2.

The new amps have been designed using the tools and experience the company has been developing and using during the past ten years' development of projects such as the Uniti and ND streaming ranges, and the Naim for Bentley in-car systems.

As Technical Director Roy George explained, in that time the company has made increasing use of computer tools for electronic simulation, enabling circuits to be designed and tested virtually, and CAD systems for purposes such as thermal analysis of designs, enabling whole products to be modelled and tested on the computers.

George says that not only does this save time, it also improves creativity, with developers now able to try things in this virtual modelling world that they would never do if they had to build and test real circuits in order to examine their performance and behaviour

He adds that over the past decade, the R&D department at Naim has risen from to 31 people, with nine now entirely responsible for software development, and that the company has written some 1.4m lines of code in the development of its streaming products, and developed over 100 products in ten years.

Steve Sells, seen left with the SUPERNAIT 2, explains the thinking behind the new NAIT models as being all about removing superfluous components and features and concentrating on performance.

He describes the NAIT 5si as 'a stripped-back racer' of an amplifier, and says that even here the main elements of the design of the new models can be seen.

The transformer is kept well away from the inputs, to keep any electromagnetic interference clear of the delicate input signals, while the power supply and its capacitors are mounted close to both the transformer and the output devices.

Control circuits are optically isolated from signal sections, and everything is done to isolate sensitive components from external vibration, to the extent of mounting critical resistors above the main board, so that their 'legs' provide some damping.

The board itself is also mounted compliantly, as are the ALPS Blue Velvet potentiometers (above) used for used for volume and balance control, and of course the amplifiers all have Naim's usual 'wobbly' mains sockets and switches, to isolate the internal circuitry from any mechanical vibration picked up on the mains cables.

The new NAIT models will be in Naim dealers in the middle of July.