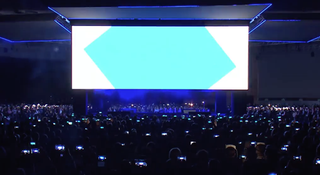 No sooner have we unpacked our cases and got over the jetlag from CES 2016 than we’re in Barcelona for Mobile World Congress 2016.

MWC sees all the big names in mobile technology making the annual pilgrimage to Barcelona to announce the latest in smartphones, tablets, portable tech and wearables.

Last year, MWC 2015 didn’t disappoint with the announcement of the Samsung Galaxy S6 and S6 Edge, the HTC One M9 and the Sony’s Xperia Z4 Tablet, and in the first day of the show, we already have our first look at some of the biggest new phones of 2016. Read on for the MWC highlights...

Take a closer look at the biggest new phones launched at MWC as we go hands-on with the modular LG G5, the spec-smashing Samsung Galaxy S7 and Galaxy S7 Edge, and the affordable Sony Xperia X (with hi-res support) and Xperia XA.

LG was first to act at MWC '16, revealing a brand new flagship phone with some genuinenly interesting twists. The LG G5 is a 'modular phone', with LG claiming you will be able to easily swap out components, should you want to upgrade or replace parts of the handset. As well as a replaceable battery, there is also the Hi-Fi Plus DAC, a hi-res audio DAC designed with B&O, which will also be available as a standalone DAC. The phone will also be available with B&O H3 headphones and there's a Harman Kardon wireless headset.

A few hours later, Samsung took to its own huge, over-engineered stage to reveal its new flagship phones: the Galaxy S7 and Galaxy S7 Edge. Offering upgraded software and hardware, the phones were arguably over-shadowed by the focus on virtual reality. Every attendee was given a Gear VR headset to wear, with parts of the launch beamed in virtual reality, while Mark Zuckeberg made a surprise appearance to reveal Oculus Rift's role in the new Samsung Gear 360 compact VR camera.

Sony didn't have a new flagship smartphone to unveil at MWC, but with the Xperia Z5 and Z5 Premium launched just last September we're not surprised. Instead, the company had a new series of mid-range smartphones and connected accessories.

The future of projectors? Sony announced a range of “smart products” at MWC, including the Xperia Projector, which can beam an interactive image on to any surface and be voice and gesture controlled.

Motorola didn't have unveil any new smartphones at the show, but did have a new range of accessories under a new VerveLife branding. The new range includes three pairs of in-ear headphones including the VerveOnes, which are completely wireless. The range also comprises a wearable camera and a pet tracker.

Samsung’s MWC launch event is always one of the biggest of the show, and we’ve little doubt this year will be any different.

Samsung has now confirmed it will unveil the Galaxy S7 on February 21st, a day before the show officially begins, and considering its Galaxy S6 predecessor got the full 5 stars from us, we can’t wait to see what its successor has up its sleeves.

Leaks have suggested the S7 will stick with a 5.1in screen and more or less the same design, so we can expect that metallic body to make a triumphant comeback this year.

However, this time around there’s talk of a microSD card slot, which would help to solve one of the major sticking points of the S6. Those hoping for a removable battery might be disappointed, though a larger capacity battery is mooted.

There’s little surprise in the rumours that we can expect a more powerful processor, with both the Snapdragon 820 and Exynos M1 thought to be running things under the hood, however the news that we could see a drop from a 16MP camera to 12MP might be a surprise to some.

Worry not though, we all know better than to judge a camera by its pixel count, and an improved lens aperture fro f/1.9 to f/1.7 should mean a better low-light performance.

Finally, it seems we can expect the Samsung Galaxy S7’s screen to be pressure sensitive, like Apple’s 3D Touch, allowing for deeper interactivity and even a Live Photos-esque feature called Timeless Photo.

Plenty to get our teeth into then, but could we see the launch of an S7 Edge too? Rumours suggest we could see a 5.5in Edge device launched, which would sit in between its predecessors’ screen sizes of the S6 Edge at 5.1in and the Edge+ at 5.7in. All will be revealed in a few weeks time…

It hasn't been six months since the launch of the Xperia Z5, Z5 Premium and Z5 Compact, so it seems a little soon for successors at MWC 2016 – but then Sony does have previous of launching two flagship phones in a year.

Still, the Z6 rumour mill has been decidedly quiet, which leads us to believe it could be new tablets we’ll see in the early half of this year, plus a possible refresh to its midrange line-up.

It’s a year since Sony launched the keyboard-toting Z4 Tablet and two since the Z3 Tablet Compact, so our money is on a new Z5 Tablet range. The question is, will either of these follow in the footsteps of the Z5 Premium and its 4K screen? We’ll bring you the news as soon as we get it.

Unlike any of the other manufacturers at the time of writing, we know for sure that we’ll be getting a shiny new flagship from LG at MWC 2016, thanks to a media invite to its launch event.

It's unusual for the brand, which has launched previous flagships, like the LG G4, at its own events, but the invite would suggest it has had a change of heart.

The initial invite simply said “Play Begins” - more than a little ambiguous, but since then, another invite has been sent out asking us to "Come meet new friends on the playground" on February 21st, a day it's calling LG G5 day. No prizes then for guessing what the company will be bringing to Barcelona.

Rumours suggest the G5 will have an all-metal body this time around, but will still offer a removable battery and microSD card slot to boost the 32GB on board storage – something the Samsung S6’s metallic frame prevented.

Also in the offing is a 5.3in 2K display, Qualcomm’s more powerful Snapdragon 820 processor, a dual lens rear camera for capturing super wide angle shots and a fingerprint scanner. A Weibo leak also suggests there’s even chance of an iris scanner for security authentication, which will be able to read your iris from 50ft.

The only concrete information about the flagship we have right now is that the official case will feature a cutout for the "Always on Display". It also sports a semitransparent mesh material, allowing you to answer calls or snooze alarms with the case still closed. It looks like we'll get the official news on 21st February.

LG has also confirmed it will be unveiling the X cam and X screen smartphones at MWC, as part of a new X Series. Both are designed to offer some high-end specs in a mid-range phone. The X cam has dual cameras on the rear and at 5.2mm thick it's pretty slim.

The second phone is the X screen, which comes with an "always on" second screen, above the main, 4.93in HD screen. The 1.76in second screen allows you to access frequently used apps, answers calls, play music and access other notifications.

With the HTC One M9 launching at MWC 2015, there is plenty of speculation that we’ll see the M10 make an appearance this year, but talk of a delay until March and next to no leaks of specs may mean HTC fans are left wanting.

The One M9 wasn’t quite the success HTC had seen previously with its One line-up, so whenever it appears, there’s a lot of pressure on the company to get it right this time.

Some rumours suggest that the company might even drop the “M” branding, with sources claiming the current codename for the device is HTC Perfume.

Whatever the name, it seems HTC could well follow in the design footsteps of its midrange A9 handset, with respected source @evleaks tweeting: “If you like the A9, you’ll love the M10”.

We’re expecting sleek styling, Qualcomm’s Snapdragon 820 processor, a screen around the M9’s 5.2in mark and hopefully a much better camera – some suggest it could use a 23MP sensor from Sony.

MORE: Read all our smartphone reviews