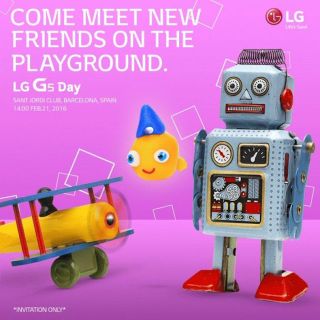 LG has confirmed via Twitter that the G5 smartphone will be launched on 21st February - a day the company is calling 'LG G5 day' - the day before MWC 2016 kicks off. It’s also the same day the Samsung Galaxy S7 will be unveiled.

The invitation also says “Come meet new friends”, suggesting there will be more than one announcement from the South Korean manufacturer.

LG hasn’t given away any details on specification, but rumours suggest the G5 will be radically different from its G4 predecessor in terms of both design and function. Suggestions hint at an all-metal build - a first for an LG flagship - a dual-lens camera, fingerprint scanner, USB Type-C charging port, and the Android 6.0 Marshmallow operating system.

We are big fans of the LG G4, praising its multimedia capabilities, hi-res audio support and Quad HD display. With just over two weeks to go until the new handset is unveiled, we don’t have long to wait to see what delights LG has in store with the G5.

What Hi-Fi? will be live at MWC with all the latest news and hands-on reviews.