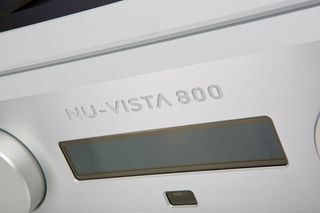 London-based hi-fi manufacturer Musical Fidelity has expanded its product range with three new integrated amplifiers – the M3si, the M6si and the NuVista 800.

Both the M3si and M6si are updated versions of the existing M3i and M6i amplifiers, which have been on the market for five years, while the NuVista 800 joins its high-end series.

Musical Fidelity has said that the NuVista 800 – costing £8000 – represents the first time that nuvistor technology has been combined with Surface Mount Design and CAD/CAM PCB concepts.

Offering 300W per channel, the NuVista 800 features a front end that's located on the same PCB as its input circuitry, and its power amp stage is based on the company's Titan amp.

The overall configuration is dual mono, with a separate 1.5kV drive mains transformer per channel. It can also "drive any speaker with any cable" due to its "huge peak current capability".

Meanwhile, Musical Fidelity has revealed the introduction of the M6si was driven by a desire for more input facilities and "an all round improvement of technical performance".

The unit's inputs include a Phono MM/MC; USB 24-bit/96kHz asynchronous; CD; tuner; two auxiliary – one with HT bypass; and balanced. Its outputs include a trigger, a line,and a pre, and despite increasing component costs encountered by the manufacturer, it said the M6si "shouldn't be significantly more expensive" than its predecessor and comes with a £2500 price tag.

Musical Fidelity said it used the introduction of its new M6si as an opportunity to launch the M3si also, which uses the firm's SMD layout techniques and has more inputs.

It might be "conceptually quite different" to the M6si, but it boasts the same line-up of inputs as its new sister model and delivers 90W per channel. The M3si is priced at £1100.