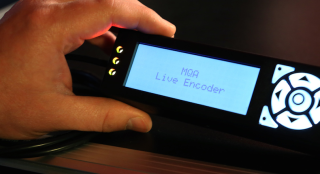 MQA (Master Quality Authenticated) – an audio technology that packages music (including hi-res audio) into a file that’s small and convenient enough to stream or download ­– has launched ‘Live’, a way for people to stream live music performances in real-time in their home or on the go.

The point of Live is to create a virtual gig experience, allowing people to listen to their favourite bands’ live performances in their “original quality” if they can’t attend the event themselves.

To do this, MQA has made a live encoder box that connects to a venue’s audio system and is able to send what is being played to the chosen delivery platform of the venue. MQA claims the encoding process “preserves audio quality and addresses bandwidth issues”.

MQA Live was recently tested when Jake Isaac and his band’s performance from London's Rocket Studios was listened to live in Austin, Texas.

It was streamed to five set-ups: in a living-room using a Bluesound Powernode 2 streamer and Sony SS-CS5 speakers; outside via a Macbook, Audirvana software, a Meridian Explorer 2 DAC and Sony MDR-Z7 headphones; in a bedroom with a Bluesound Pulse Flex wireless speaker; via an LG V30 smartphone and Oppo PM-1 headphones; in a car, using an Apple iPhone 8, Amarra Play app and AudioQuest Dragonfly DAC.

MQA music can be played back on any device, although only MQA-supported products (of which there are now several, some of which are included above) and software will be capable of unpacking the MQA stream’s full quality.

When this experience will actually land in people’s laps, and whether it will eventually be available within Tidal (currently the only music streaming service that supports MQA) is yet to be announced, but let this serve as a heads-up. MQA Live is a thing, and it's coming.