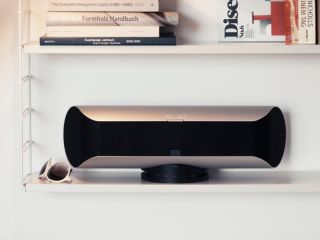 Great Fridays – a product and service design company that has worked with the likes of Sonos and Bowers and Wilkins – partnered with Mission to produce a "sleek" interior that houses a "host of headline technologies".

Aero incorporates a 6.1 speaker configuration comprising seven drive units each powered by its own amplifier – six of which are broadband BMR drivers, with four firing from the front and two from the side.

A downward-firing 12cm subwoofer that's ported through Aero's circular base completes the configuration, with the drivers designed to fill the room with sound – whether you place it against a wall or on a desk in the open.

BMR stands for Balanced Mode Radiator, with the drivers described as "very different" from traditional drive units as they operate like a piston at low frequencies off-axis and become a bending wave device at high frequencies.

It's this feature that Mission says leads to wider sound wave dispersion around your room. And Sonic Emotion's 3D signal processing technology has also been included to further create an "immersive musical performance".

MORE: Read all our Mission reviews and news

Bluetooth aptX and AirPlay technologies are on board to let you stream your music from a wide range of devices, while there's also a 24-bit/192kHz-capable USB input and optical input for high-resolution audio support.

Other connectivity options include a 3.5mm analogue input and DLNA certification, which lets you hook Aero up to a home network. It also comes with the ability to dock/charge Apple devices and download firmware updates.

Aero is now available from Selfridges' flagship London store at a cost of £500, although other department stores such as John Lewis, high street retailers and specialist audio dealers will follow suit throughout September.