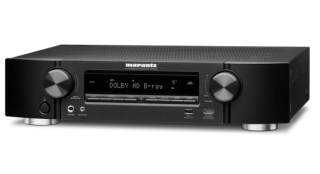 Marantz is to introduce two new 'slimline' AV receivers this year: the NR1609 and NR1509, which should replace the existing NR1608 and NR1607 models.

While you might expect them to have a half-width chassis, the 'slimline' refers to the height of the machine – they’re half the height of traditional AV receivers, closer in styling to the company’s budget CD players and stereo amps.

And while they aren’t necessarily better for you than traditionally-sized models, they make sensible options for those short on rack room.

The NR1609 has the higher specifications, with 7.2 channels and support for Dolby Atmos and DTS:X. That means it will support a 5.2.2 speaker set-up (with the last ‘.2’ representing two height channels).

There’s also support for DTS’s Virtual:X post-processing technology, which aims to virtually create the effect of a 7.1.4 surround set up from a 5.1 or 7.1 speaker configuration, for example.

The 50W-per-channel NR1609 has eight HDMI inputs (including one on the front panel), all of which support HDCP 2.2 and BT.2020, and allow for HDR 10, Dolby Vision and Hybrid Log-Gamma (HLG) pass-through.

It supports the HEOS wireless multi-room platform, which lets you access your networked files as well as streaming services, such as Spotify, Tidal, Deezer and TuneIn, via the HEOS app.

With Amazon’s Alexa built-in, the NR1609’s playback can be controlled via the HEOS platform, allowing users to play or pause music, adjust volume and switch inputs with their voice. The NR1609 also features a phono input for connecting a turntable.

Meanwhile, the NR1509 matches its sibling for specs – including power output, HEOS network streaming and phono input – but has 5.2 channels, six HDMI inputs and doesn’t support Atmos or DTS:X. Instead, it has Dolby TrueHD and DTS-HD Master Audio decoding.

4 of the best home cinema amplifiers