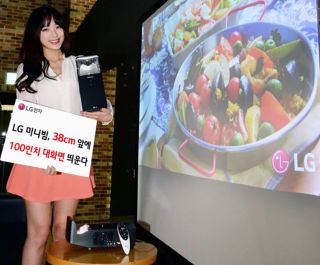 LG also says it’s ideal for carrying around due to it weighing 1.9kg, which, according to the company makes it the “lightest Short Distance Focus projector in the world”.

It comes with a four-corner keystone function for adjusting the image on screen when it’s placed on uneven ground, and built-in Bluetooth for wirelessly connecting to a soundbar or speaker system.

The LG MiniBeam PF1000U will cost approximately $1,340 when it’s released, although UK and US availability has yet to be announced - US website B&H Photo has the projector listed for $1399.

It also says it comes with a built-in digital TV tuner and a 30,000 hour lifespan for the LED light source.

Netflix, Google Maps, Spotify and Hulu among others are likely to be available through LG's app store.