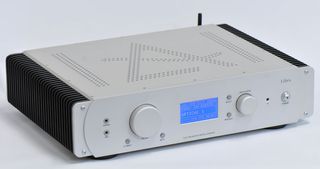 The device – due to make an appearance at the Bristol Show 2015 later this month [February] – also features the company's Quattro Infinity dual-mono modules that can be upgraded over its lifespan.

It's the latest addition to the company's flagship Constellation series and incorporates the same precision-machined outer casing as the five-star Tucana amplifier and Antila CD player.

MORE: Read all our Leema Acoustics reviews and news

It offers a range of connectivity options, with three coaxial and three optical inputs accepting 24-bit/192kHz audio. There are also two I2S inputs via RJ45 connectors and two XLR inputs.

Meanwhile, the Libra also includes three analogue inputs – each of which can be configured as unbalanced or balanced.

For wireless streaming, Bluetooth is on hand to pair up a smartphone, tablet or other compatible device. And a headphone amp is also provided if you want a more personal experience.

In addition, Libra is described as a "full LIPS controller" – using the Leema Intelligent Protocol System, it can communicate with other units in the Constellation series and control them too.

MORE: Bristol Show 2015 – news, exhibitors and all the details