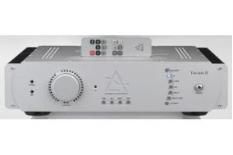 Best stereo amplifier £2000+, Awards 2010. The Tucana has always been a great amplifier. This latest version remains among the best at the price

There wasn't much wrong with the original version of this amplifier.

The Leema Tucana was, and remains, a beautifully built integrated amp that manages to combine a whole raft of useful features with the kind of sound quality even stripped-down ultra purist alternatives would be happy to have.

The differences between the Mk1 and Mk 2 versions are subtle and significant.

On the outside, the original's input selector control knob has gone, making way for a series of illuminating push buttons.

The new version also gains a front panel-mounted headphone output and a 3.5mm ‘mp3' input. Other additions include a balance control, a gain adjustment to equalise the volume between sources and a balanced XLR line-level input.

Intelligent performance
One feature carried over from the original is a Leema-specific communication system. This component-to-component link is called Lips (Leema Intelligent Protocol System) and allows a complete stack of Leema kit to perform intelligently.

So, for example, if you select the CD input on the Tucana, the partnering power amplifier (if used for surround duties) will switch off, as only the front channels need to work.

Take off that neatly-machined lid and little obvious has changed. Leema's engineering changes amount to fine tuning of circuitry, electronic board layouts and upgrades to components.

Subtle changes reap big rewards
It doesn't sound particularly exciting, but the hike in sonic quality is easy to hear. The Tucana's basic character hasn't changed much – this is still a pleasantly big-boned amplifier.

The rated power output remains 148W per channel, which is about par for the course. But the Leema confounds expectation by sounding far more muscular.

If you like listening to music loudly there are few amplifiers anywhere near this price that can play at high volumes with so little sign of stress. Where most of the competition would turn bright, harsh and edgy, the Tucana II continues to hold on to its refinement and composure.

The muscle shows through in other ways, too. Bass frequencies are punched out with real venom, while there's no shortage of weight and authority in this region, either.

Dynamics are strong and wide-ranging, which is just what you want when listening to demanding music like Shostakovich's Symphony No.7 or Arvo Part's Litany.

Poise as well as power
It would be easy to come to the conclusion that the Tucana is something of a brute, but that wouldn't be true, as there's no shortage of finesse here.

The likes of Eric Bibb, Tracy Chapman and Bonnie Prince Billy all shine with this amplifier: its carefully layered midrange and skill with low-level nuances seeing to that.

Equally, the highs lack nothing for bite, but are delivered with just the right amount of refinement.

All the qualities we've talked about go into making this a great amplifier, but it's the way this Leema ties things together that make it special, even at this kind of money.

Latches on to rhythms with gusto
For starters, it times really well. Give it a hard-charging tune such as Lady Gaga's Let's Dance and the Tucana will latch on to the rhythm track with some considerable determination.

It's not just about how the amplifier replays beats, either: the cohesive manner with which it captures the timing between instrumental strands also impresses.

The result is a musically compelling machine that plays all types of music without favour.

It's an amp that simply gets out of the way, allowing the music's message to come through with clarity. Yet despite digging up a lot of detail, the Tucana isn't prone to over-analysis and that makes it an easy listen.

Almost three and a half grand is a lot of money for an integrated amplifier, but the Leema's broad spread of talents makes it worth every penny.