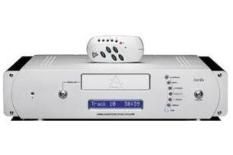 Can Leema do no wrong? We've previously seen only three of its offerings, but each has received the coveted five-star verdict. It can now add a second pair of speakers – and even a complete system – to that monstrously impressive list.

It helps that from the first moment you lay eyes on a Leema product, you know that you're dealing with something special.

Unique, appealing design
The styling of the big CD player and amplifier is industrial-chic, its cooling fins and machined holes combining to pleasing effect. The speakers were not what we were expecting, being extremely thin and compact floorstanders. However, they're unique, and not unattractive.

But styling counts for nought if performance underwhelms – though this Leema set-up couldn't be more impressive.

Much of its success is down to its neutrality; sound is rich without being sanitised, sparkly but never harsh, and punchy without being hard. It's this carefully balanced tightrope act that means the system suits all musical genres. If you fancy a bit of Arvo Part's Tabula Rasa, the Leemas respond with delicacy, richness and exceptional detail.

Try Farewell on the Crouching Tiger, Hidden Dragon soundtrack, and the background drum beat that can so often sound slow, stodgy and hard to follow is punchy, dramatic and clear. If you're more in the mood for some of Enter Shikari's disco-metal mayhem, however, you'll discover a performance with exceptional coherence, timing and attack.

There's even a surprising level of bass, considering the fairly diminutive size of the Xone's drivers. True, these speakers don't go as deep as some rivals – in fact, they even seemed a little lightweight to us at first – but over time the true genius of their realism, balance and punch becomes abundantly clear.

Power allied to control
Also surprising for a speaker of their stature, the Xones like to be pushed rather hard by the electronics. This system can go ear-achingly loud without ever straining or losing composure.

In short, this is as close to one-make perfection as you'll ever get.