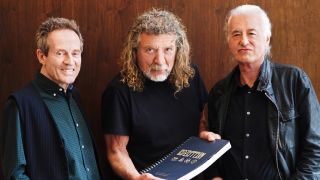 Do we need another streaming service? Possibly not. But if it's hosting live shows of one of the most influential bands of all time, we could probably make an exception.

Led Zeppelin reportedly want to trademark the name, "The Led Zeppelin Experience", for the purpose of "providing non-downloadable prerecorded music on-line via a global computer network".

Despite sounding like it was written in the early days of the internet, this filing has just been lodged in the US, following similar filings in the UK and Europe earlier in the year. Fan site LedZepNews reports that the trademark application specifically refers to live audio recordings rather than studio albums.

Last year Jimmy Page teased a new "Led Zeppelin product" would be released in 2018 to mark the band's 50th anniversary. Could a streaming service be that surprise? Let's hope any new offering fares slightly better than Neil Young's Pono...