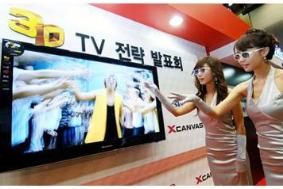 The installation of the facilities will start next year, and the new line, using 2x2.5m glass, will add 68,000 panels per month to the plant's capacity, currently thought to be around 100,000/month.

That will take LG's capacity to 408,000 panels per month, more than quadrupling its current output, and giving it double the current production achieved by Samsung and Sony's S-LCD joint venture.

At the moment Samsung has 28.8% of the world LCD panel market, based on figures for the last quarter of last year, putting it 5.3% ahead of LG.

This is the latest audacious move by LG Display boss Kwon Young-soo, who took over when the company was still a joint venture with Philips. Rivalry with Samsung at that time had seen LG Display suffering significant losses, and Kwon immediately scrapped investment plans and concentrated on cost-cutting.

He cut the ties with Philips in 2008, and last year ended the investment ban and set his sights on giving the company market leadership.

It remains to be seen how other rivals will react: Samsung certainly has the wherewithal to fight back with further investment, Japanese rivals Sharp and Panasonic are planning increased production, and the Taiwanese LCD manufacturers have also announced hefty investments.